It's a Cake Rock!

The Fort Collins Studio Tour is coming up in a week and I hope you'll swing by! Here is the piece I made for the gallery exhibition at the Lincoln Center.

This piece measures 20"x30"--big for me! I'll post a photo of it in the gallery soon to give a sense of scale and to show you how wonderfully placed it was next to other works from local artists. Meanwhile, here's some detail. 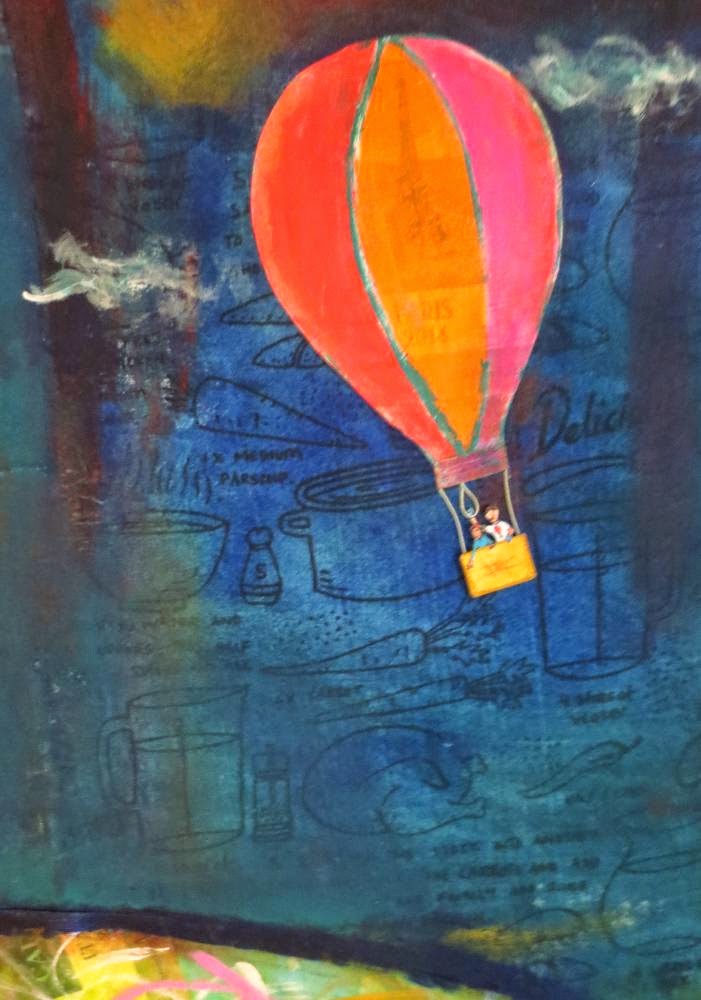 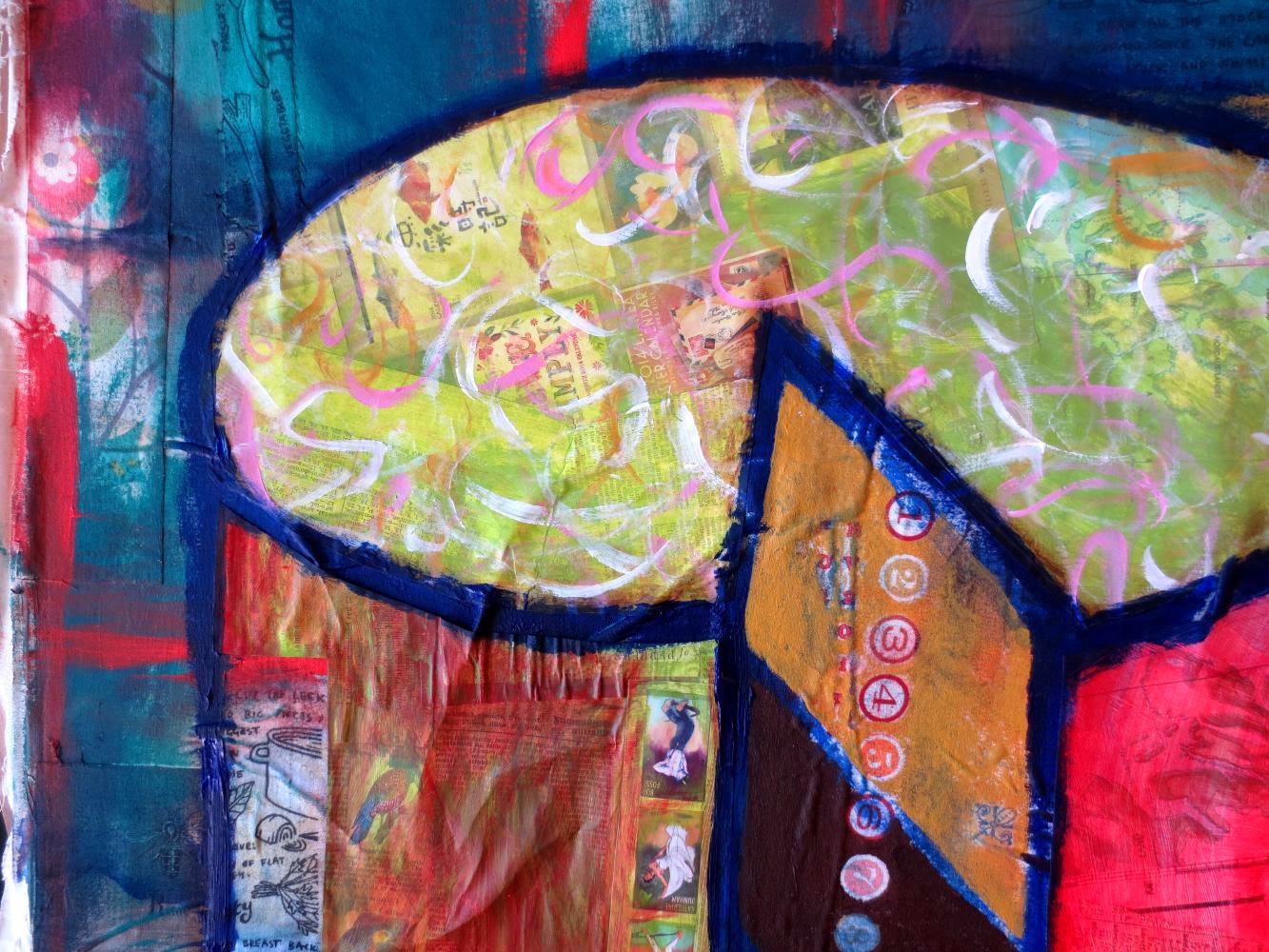 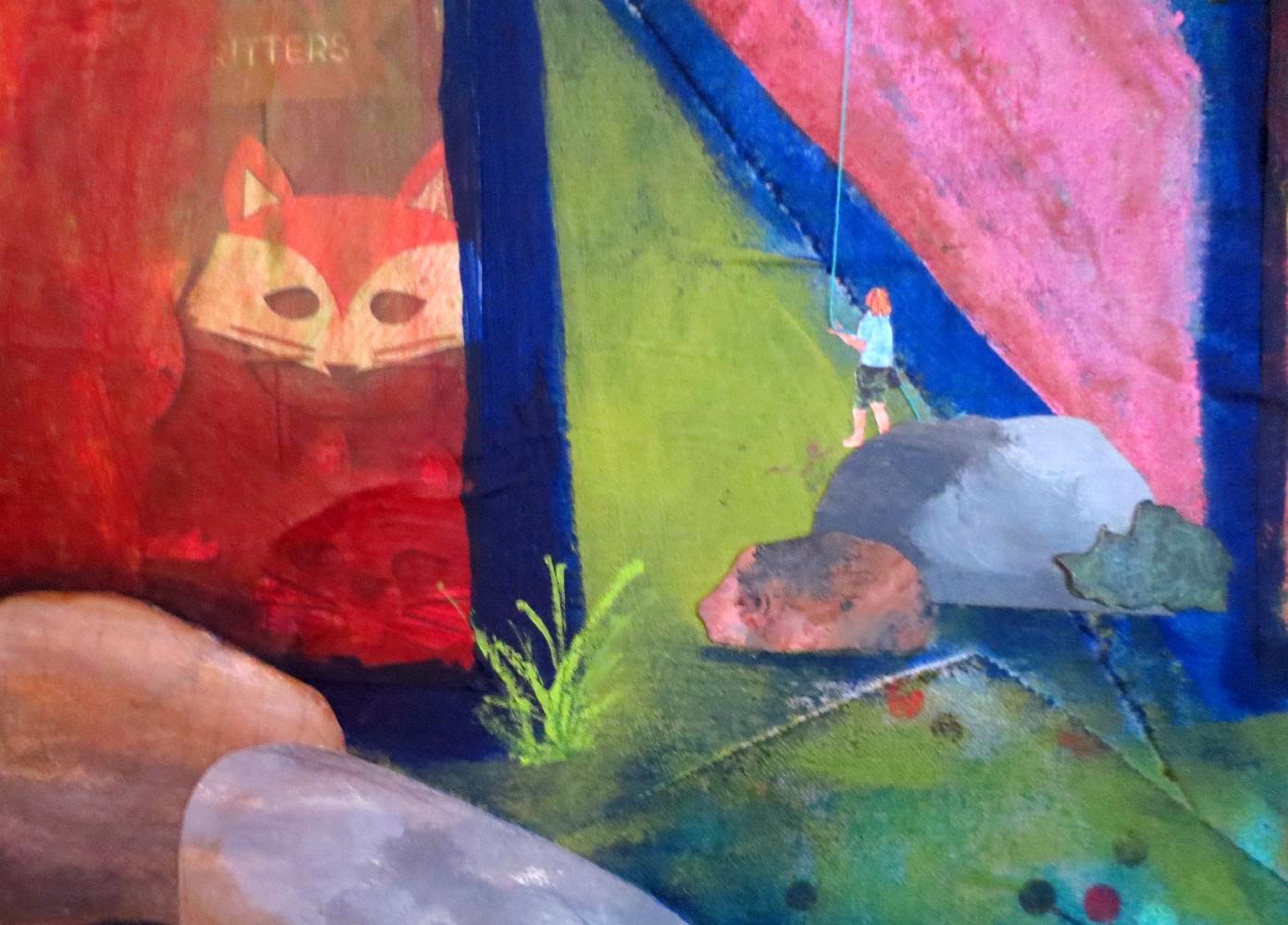 This is mixed media (collaged paper, fabric, acrylic paint and pen & ink) on foam core (which I wouldn't do again, by the way).

Twenty-five of us participated this year in the 7th annual 6 Degrees of HLM International Card Swap! Here is the photo of everyone's cards laid out on the floor. 250 cards at once! Several (but not all) of the cards followed the theme (new this year) of either "blue" or "mountain." 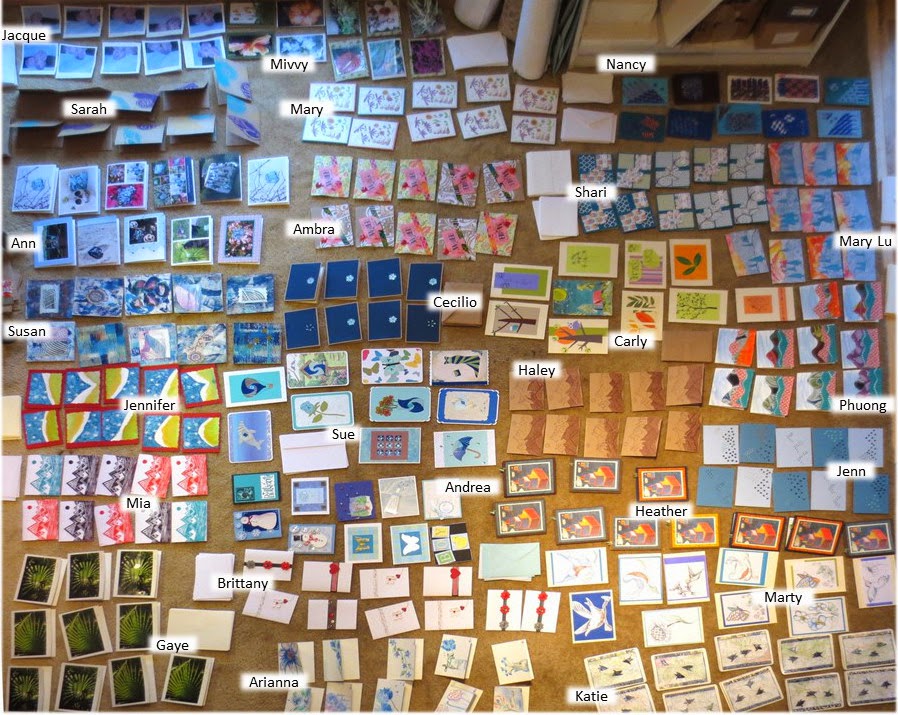 Andrea (from Fort Collins) likes to recycle old cards she gets--since she received lots of cards when her two boys were born, she has lots of blue remnants.

Ambra (from Buffalo, NY) had to scrap her "blue" idea and at the last minute, she popped these out in just a couple hours. 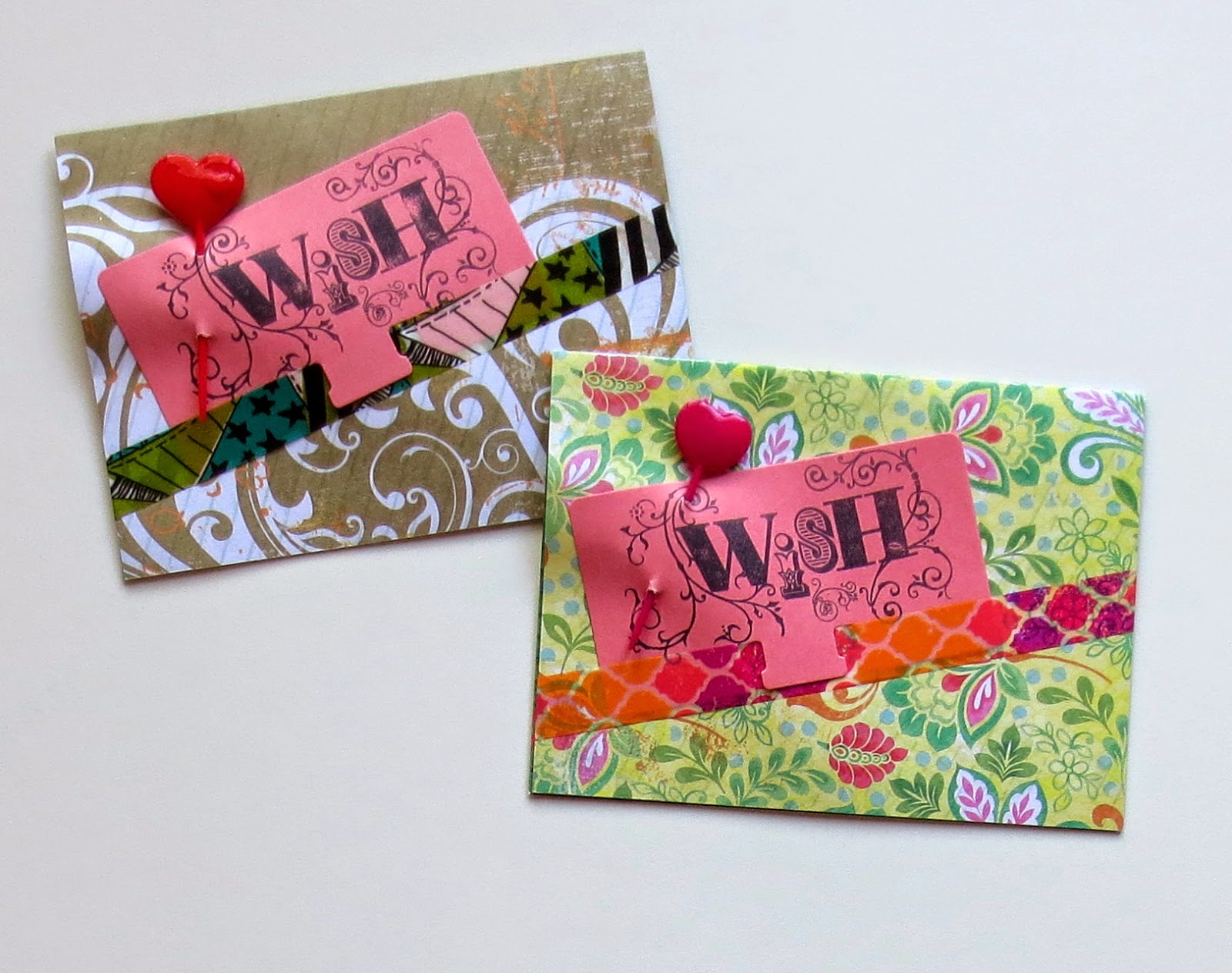 Ann (from Bonsall, CA) joined in again after having last participated in the first year! She received a small blue coin purse from a friend and then documented its travels around her area, à la Amelie's gnome.

Arianna from Highlands Ranch, Colorado managed to participate in the swap in her last semester of college! She shared with me earlier in the year that her painting has been prolific since her study abroad experience at an art school in France her junior year--she even had a show up at a local coffee shop last winter! She was inspired by blue flowers for the swap, aiming for "refreshing." She says she always incorporates a French theme in her work now. 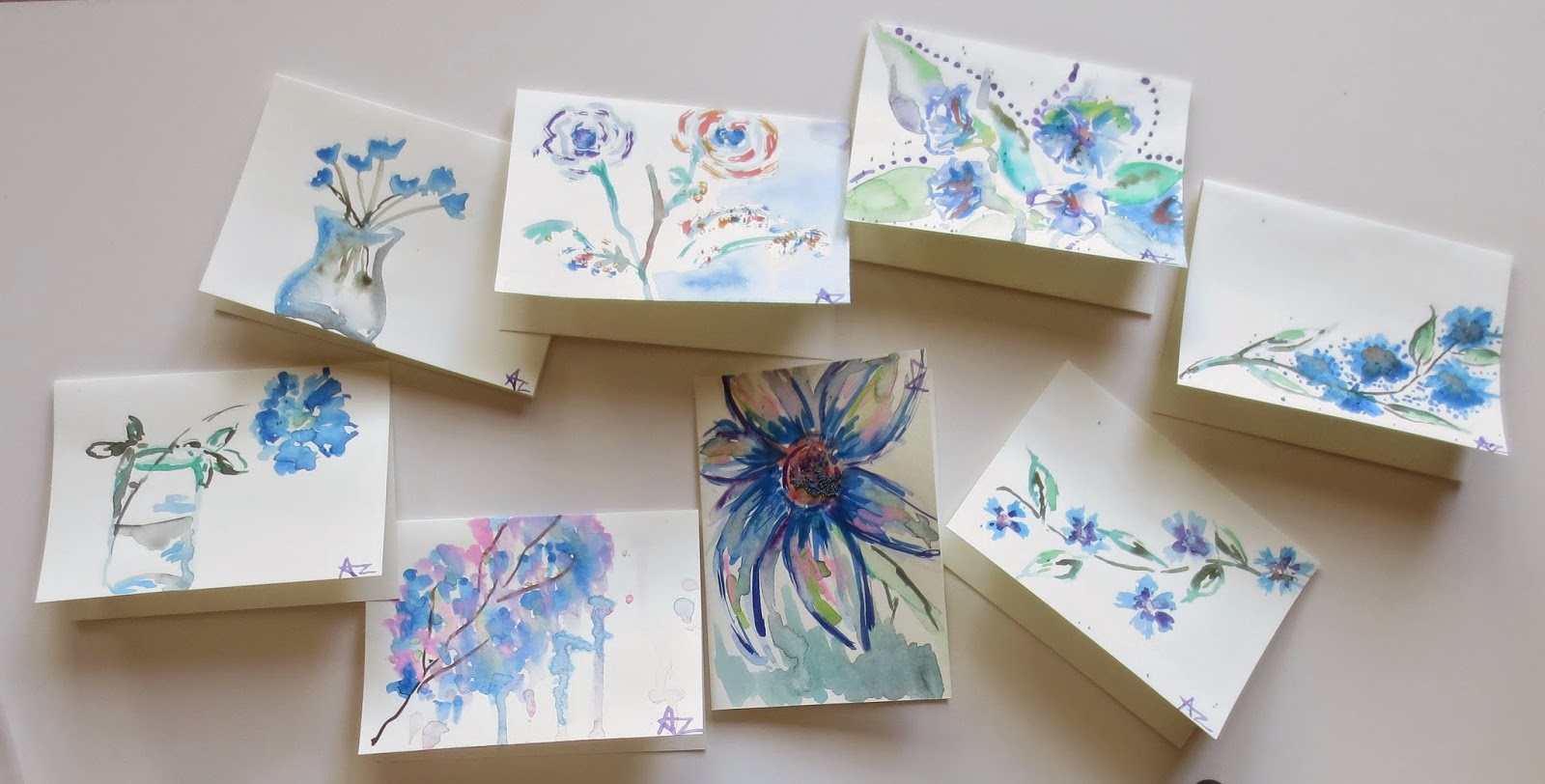 Brittany (from Fort Collins) diverged from the theme, but produced a crisp card appropriate for many occasions. She was so delighted to finally participate--she's been wanting to for years! 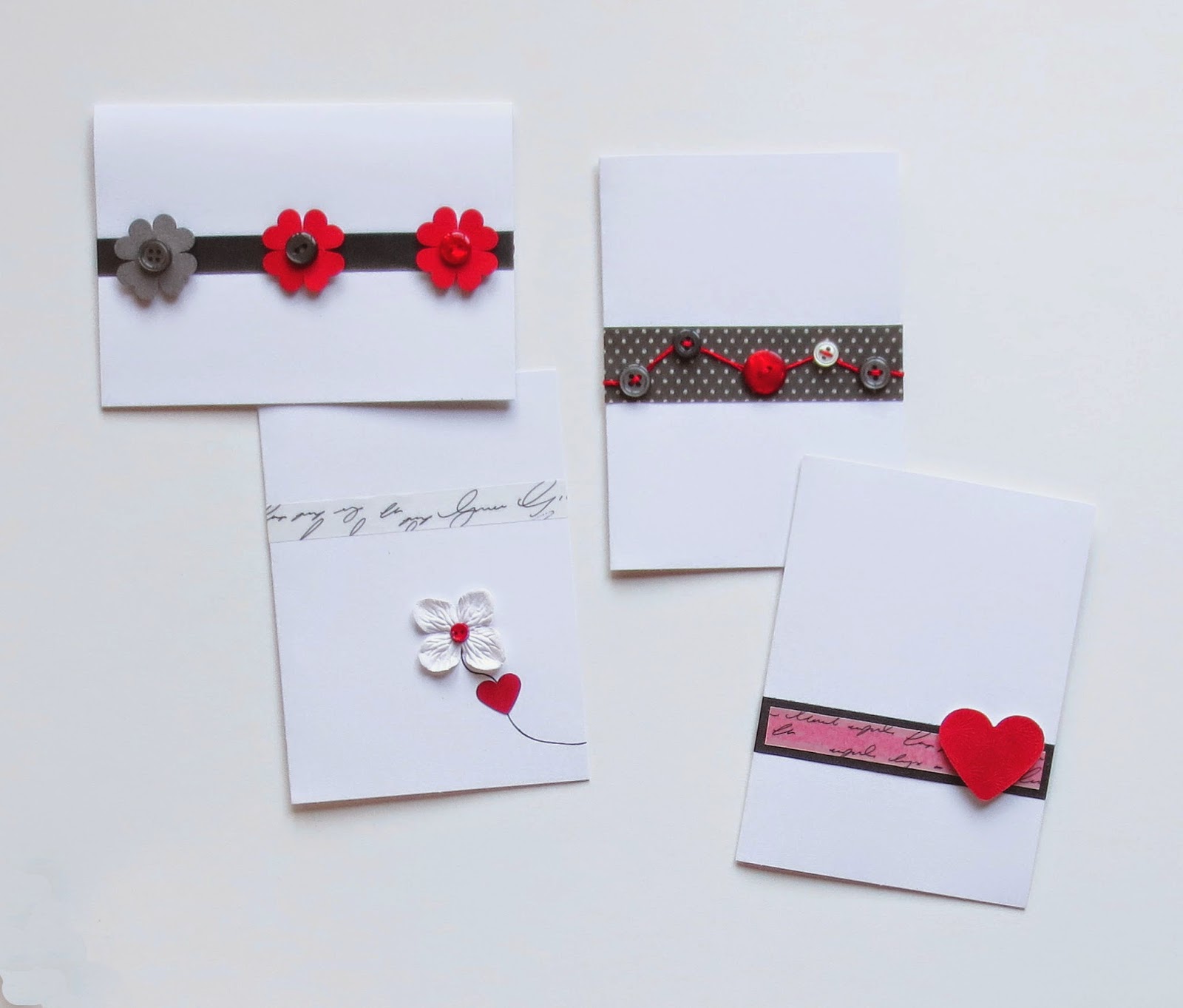 Carly and her mom Marty, both from Iowa, participated in the swap together.  I heard there was a day when they both worked diligently at the table together!  It seems card-making makes for excellent together time.  :) 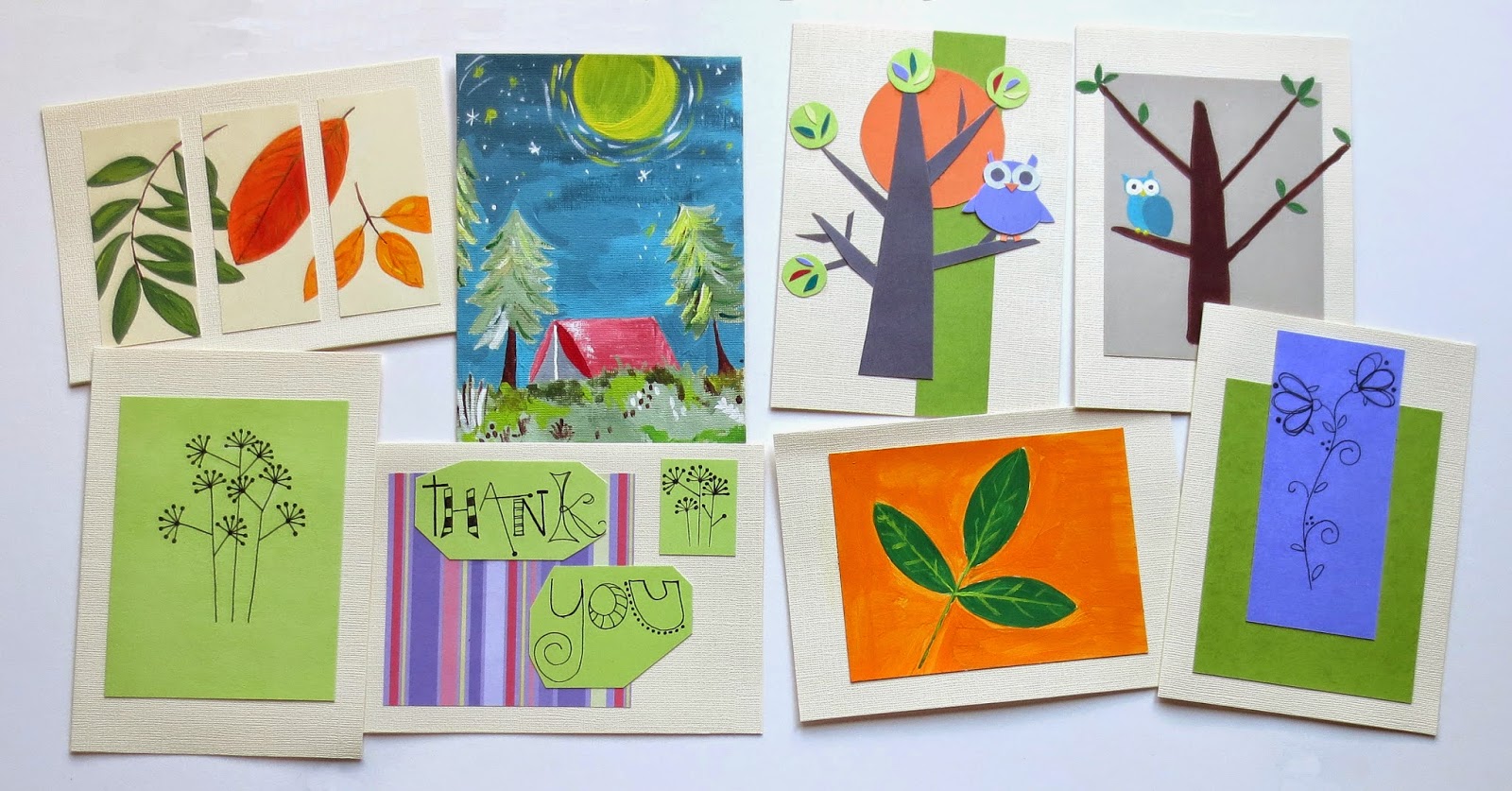 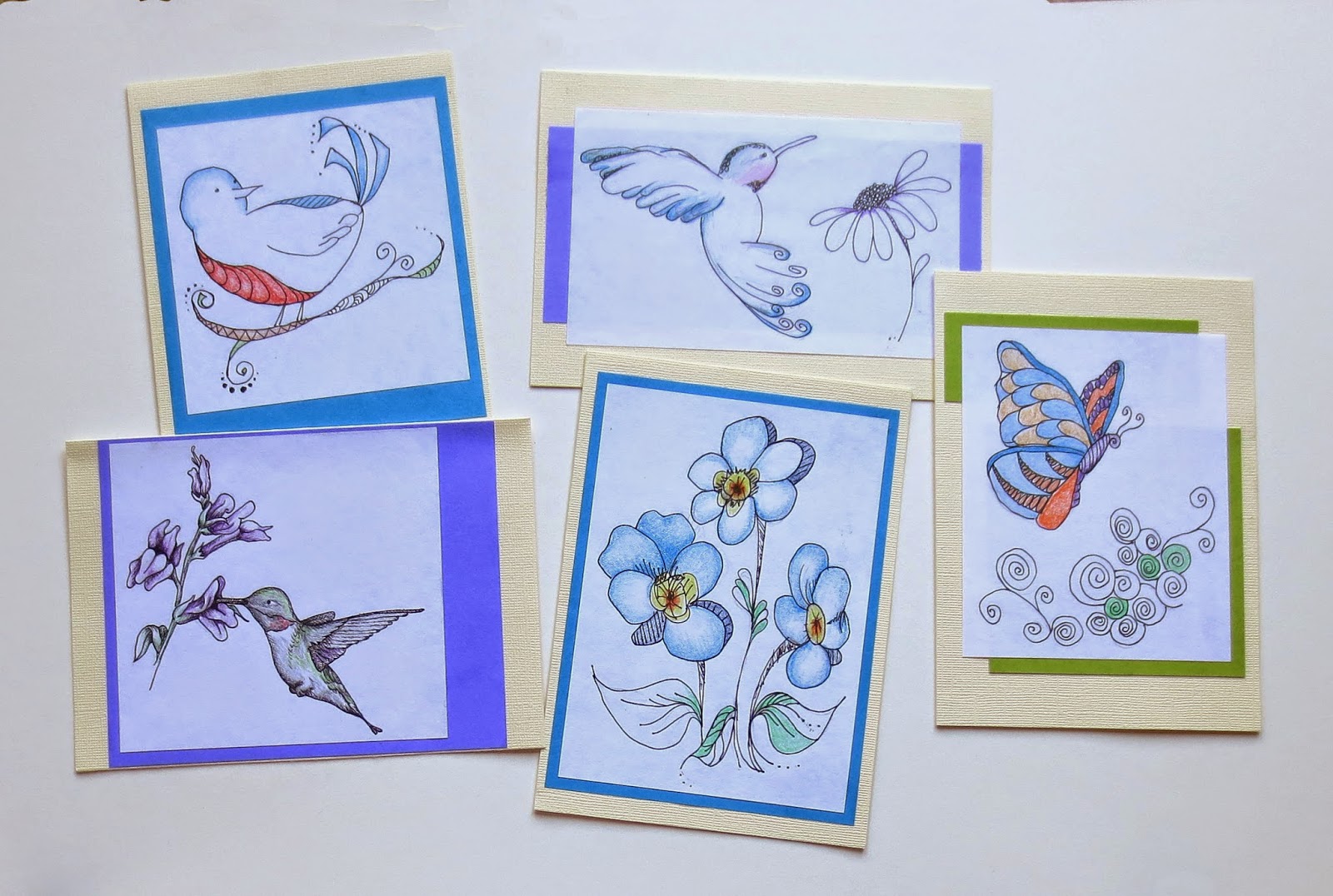 Gaye (from Fort Collins) has had a pretty busy spring, so kept it simple with her fern photos from Belize. 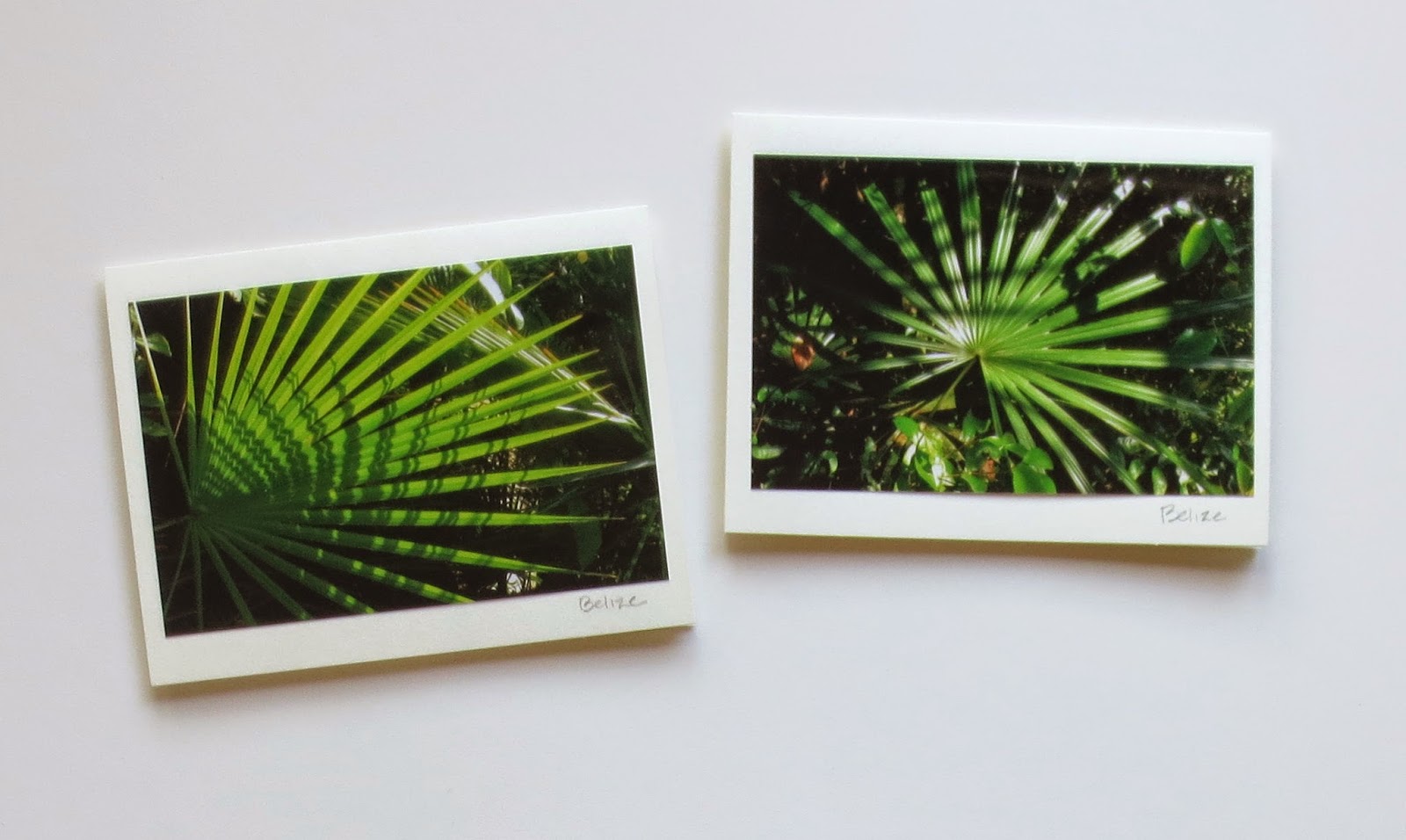 Haley, also from the Fort, found an old drawing that she did, and modeled her mountain cards after that. With her highly scheduled life, this art project could travel round with her. All she needed was her pen and the blank card. Whether at home or standing in line, she could keep her commitment to the Card Swap! 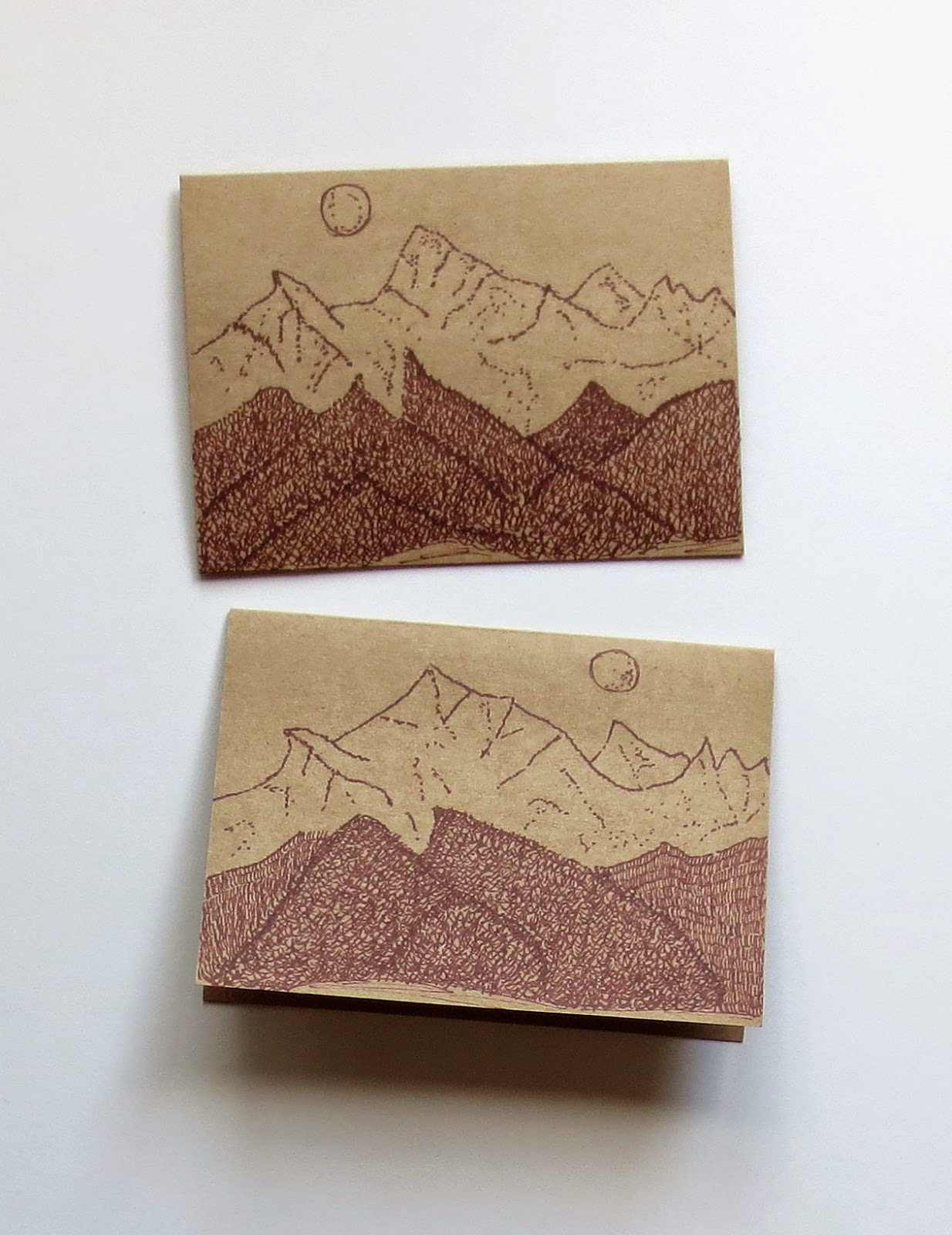 These are my cards this year! I, too, have been busy with other art commitments, so I did my best to keep the small pieces to a minimum!  The design may seem a bit random, but be assured it fits both with blue and with mountain! Right when we started the swap, I was working on linear perspective and drawing boxes in my drawing class. It was actually one of my favorite assignments. At the end of class that day, we all hung our drawings up for the class to see, and in a passing moment, my teacher said that my drawing reminded her of Whole Foods marshmallows, pillowy and soft.  So these are mountains of marshmallows. The text behind the image is all the words I could think of that swam around in my head in regards to blue, mountains, and marshmallows. :) The coolest thing is that the little trees at the top are leftover from my swap card a few years ago. It was great to use them up! 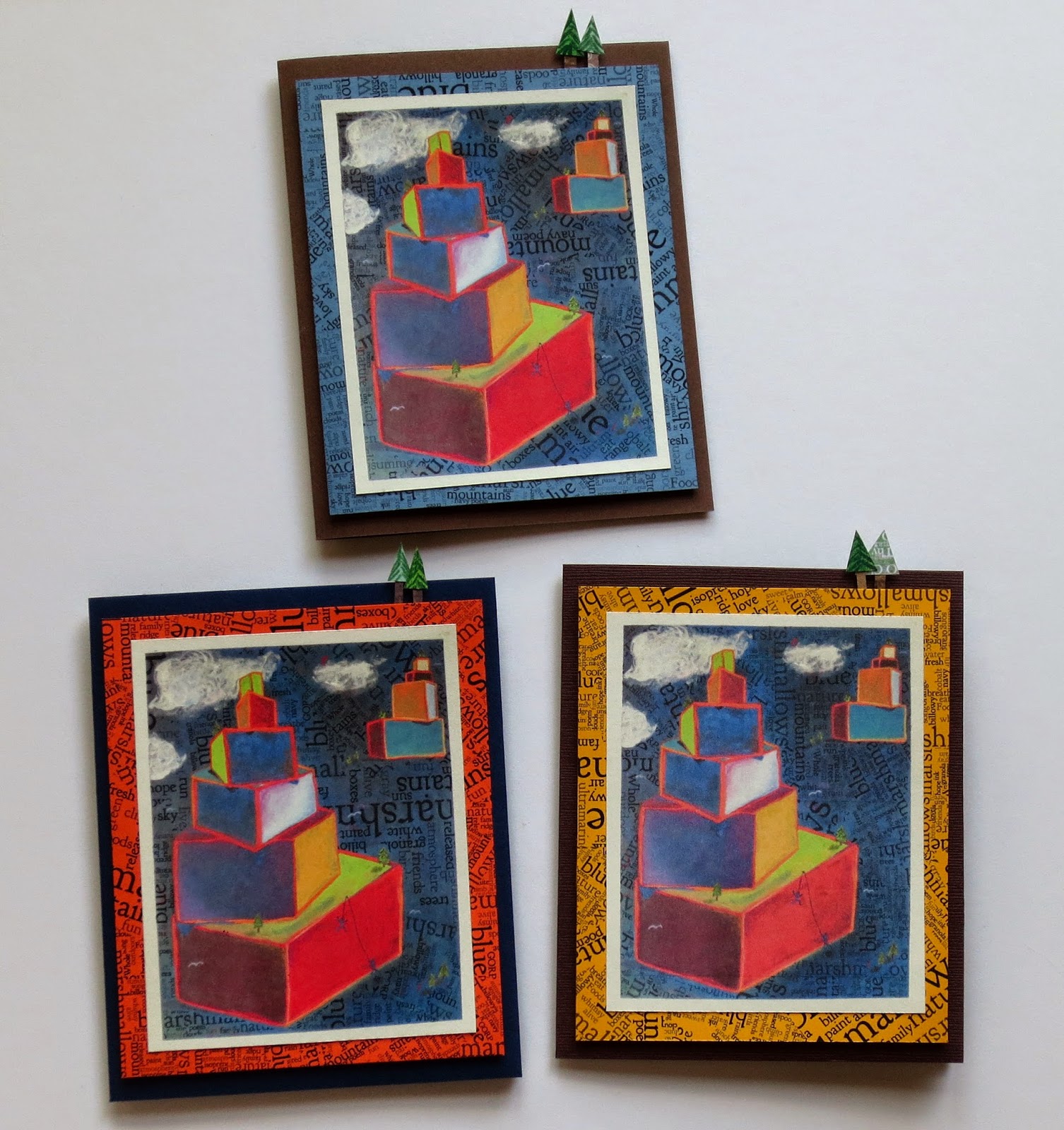 Jacque, from the San Luis Valley in southern Colorado, was also finishing up her last semester of college as she made her cards. She minored in botany and found this particular flower in the Colorado State University greenhouse. She loves painting plants. 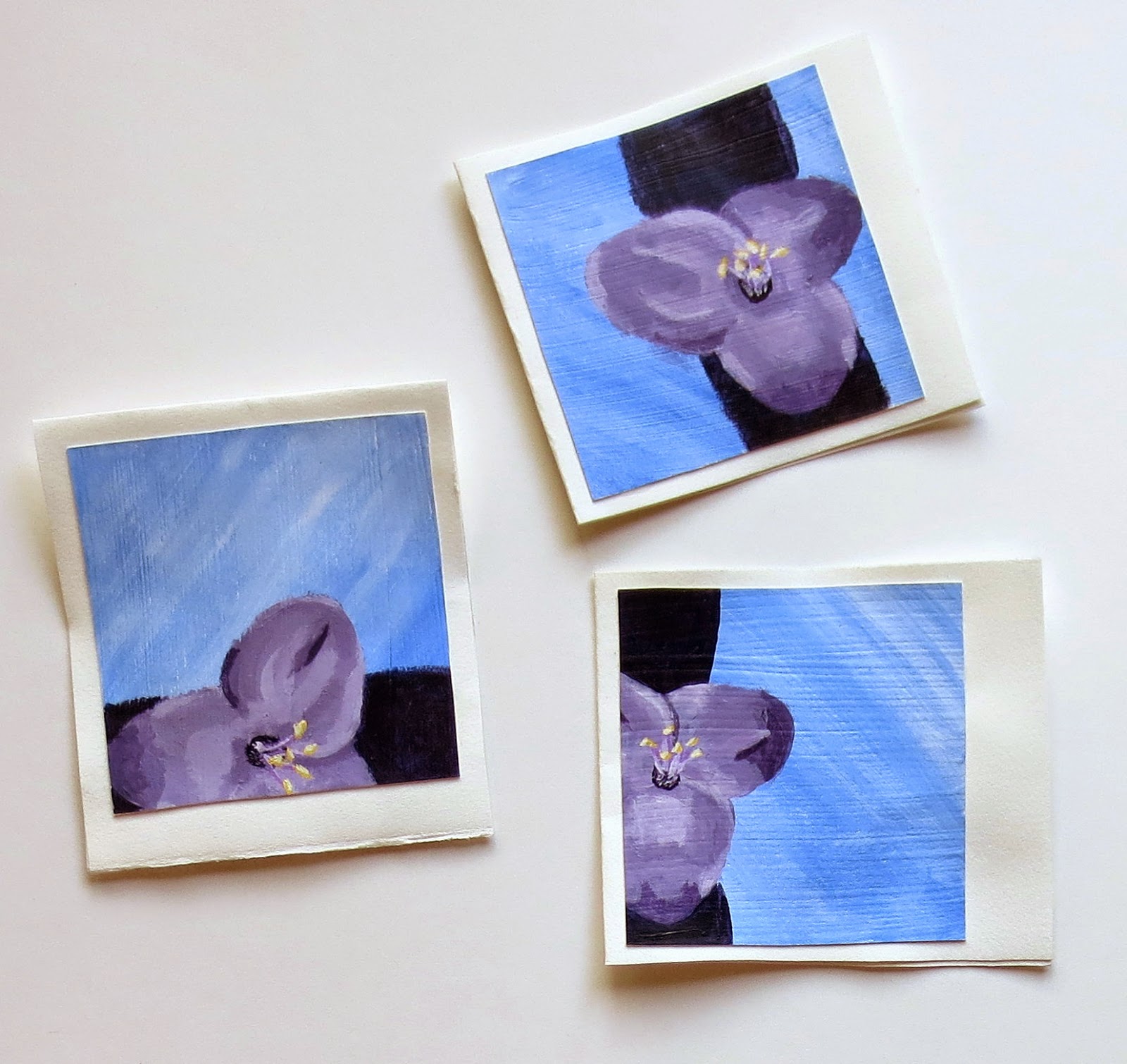 Jenn (from Long Island in New York) found a hole punch and came up with a more abstract, simple interpretation of our mountain theme. 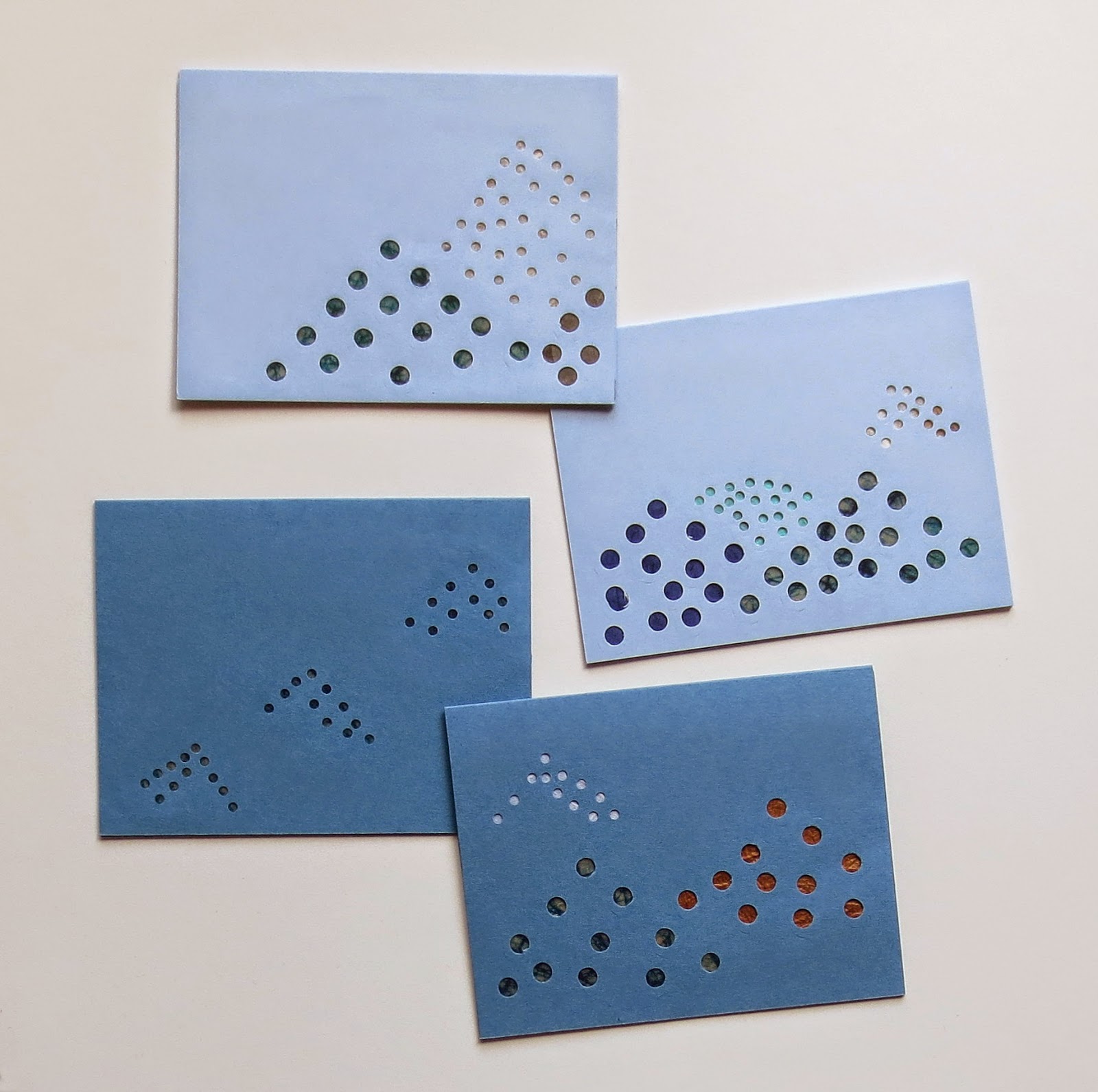 Jennifer (from Santa Rosa, CA) used salt in her painting to get the fuzzy effect. She painted over star stickers, then removed them to get the star shapes in the night skies over the hills. 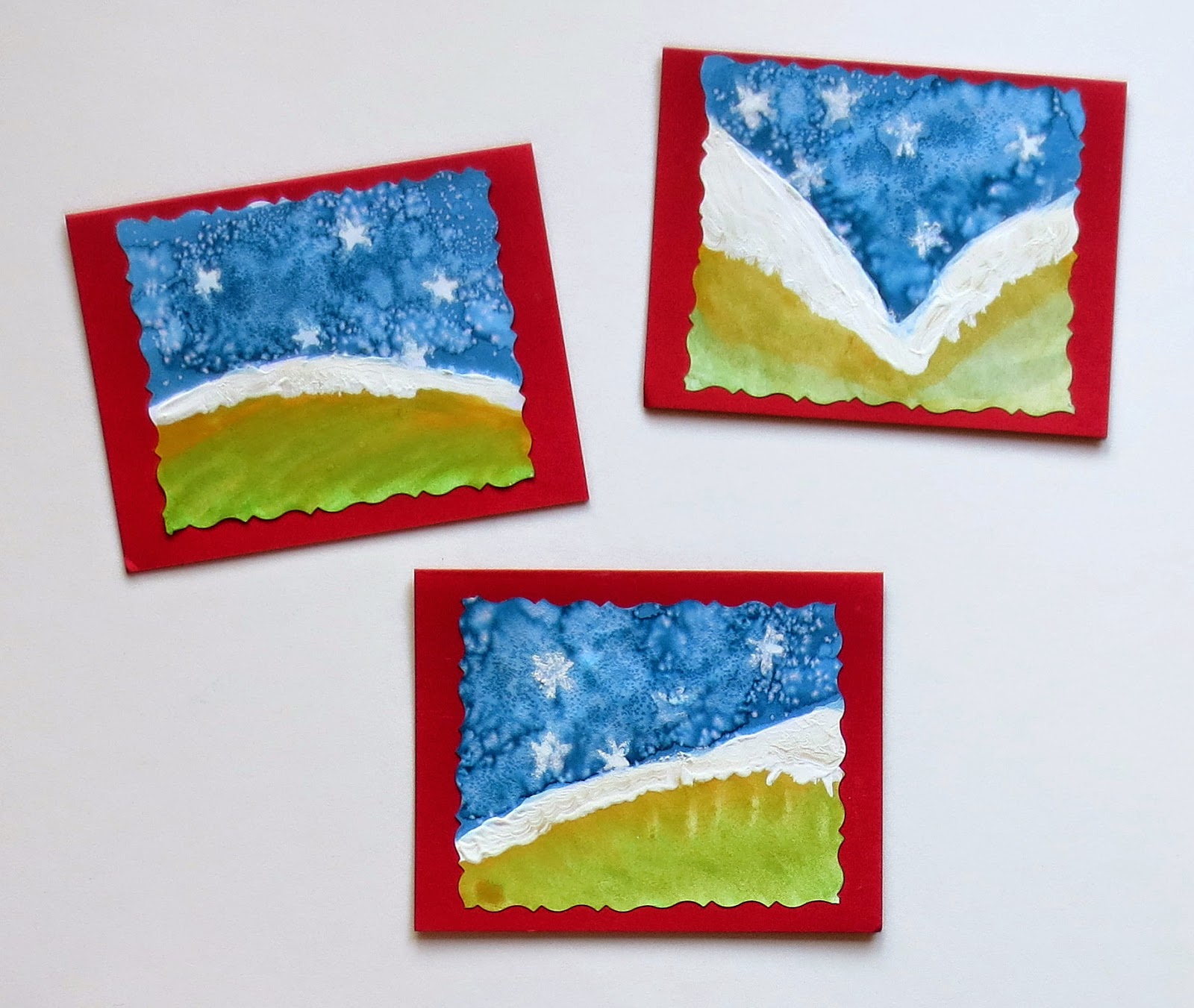 Katie made four mini origami cranes for each card! That is a lot of cranes! She says she'd been collecting maps for some time and the blue theme inspired her to use them up. 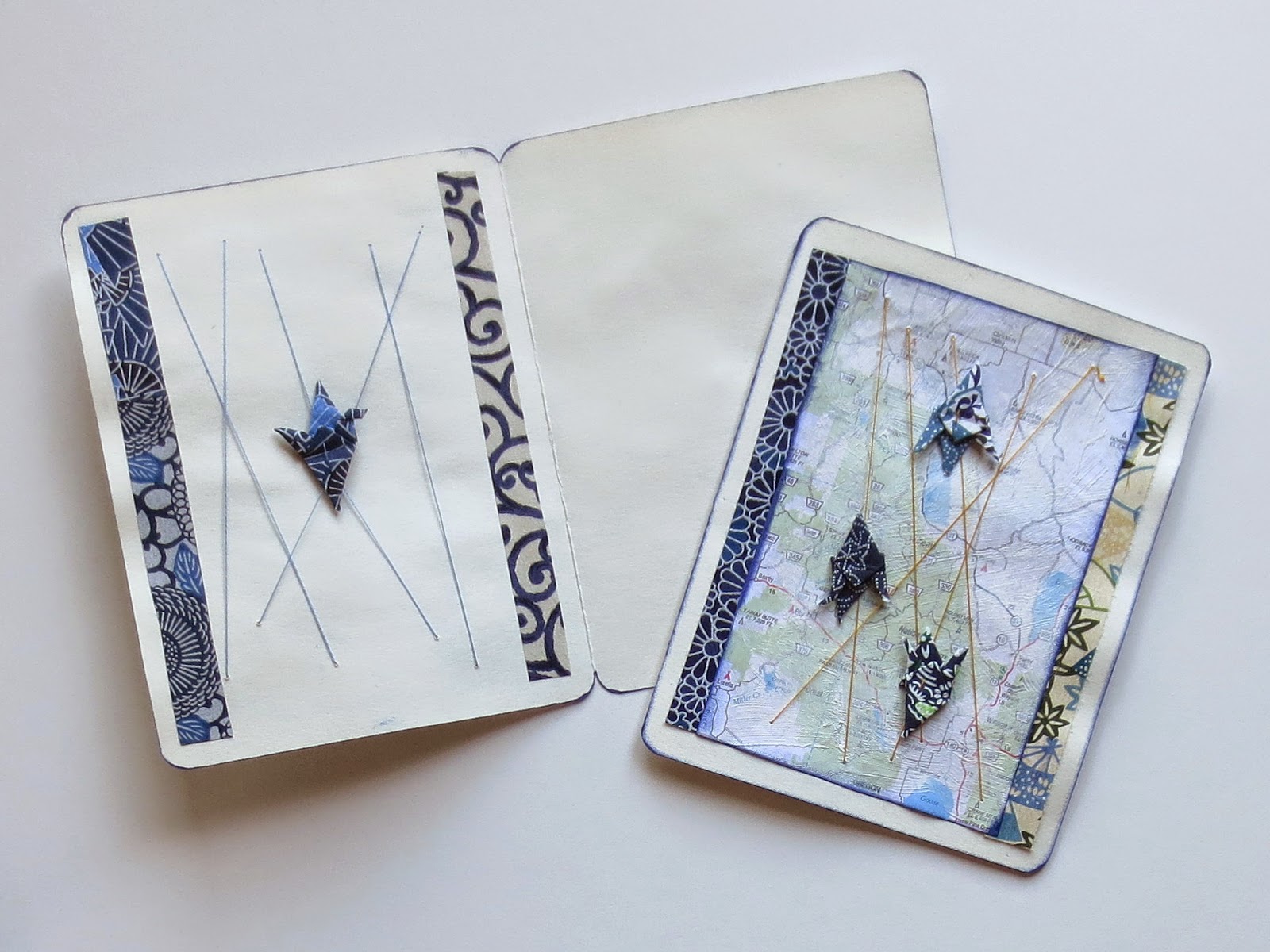 Mary Lu and I spoke on the phone as she was working on her cards and she was convinced that she'd have to scrap them and start over. She said at one point that they were on the verge of looking like something a 3rd grader had made. But in the end they came together. I'd say this very adequately represents her style. 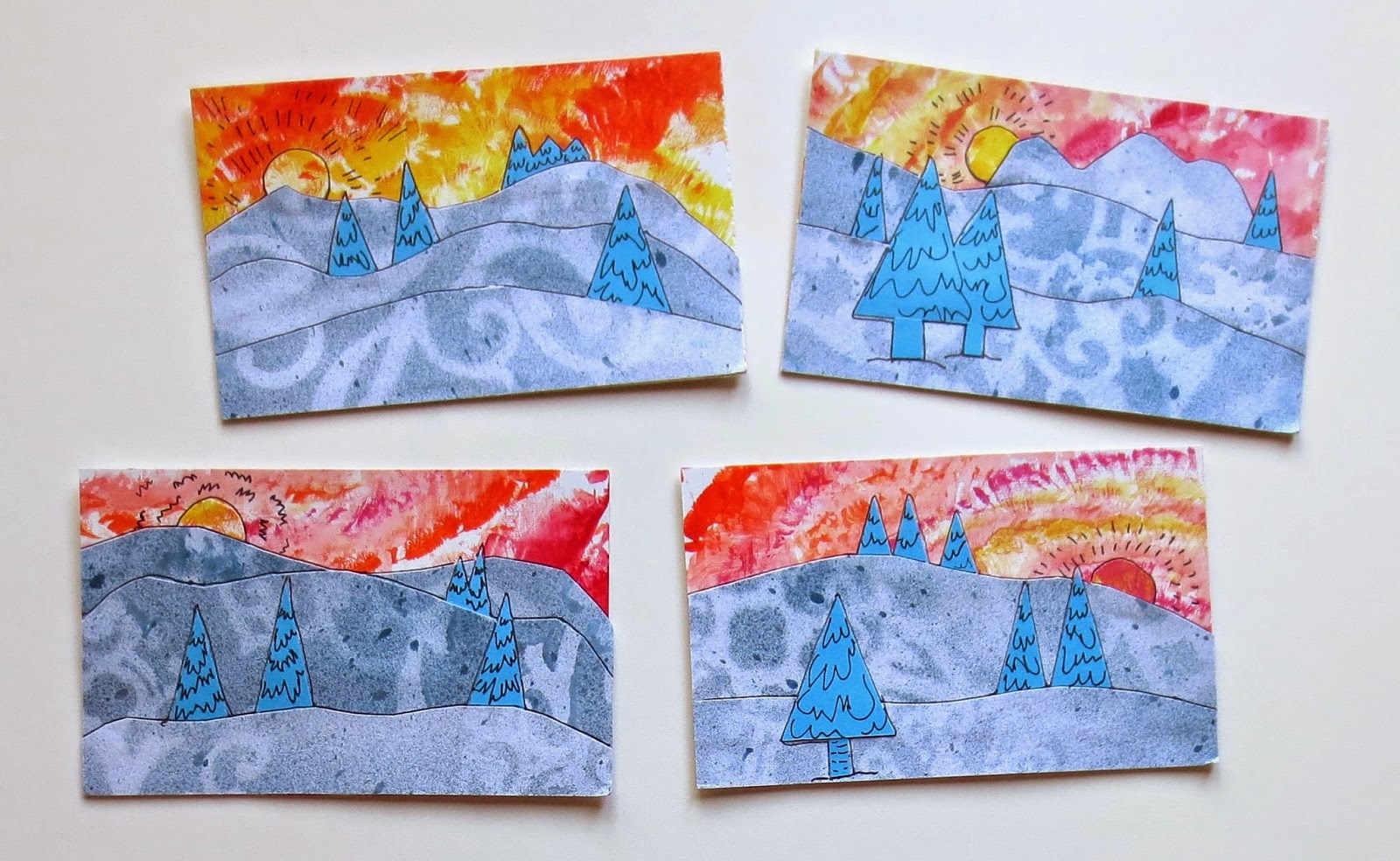 Katie's mom Mary participated for the first time this year. She downplayed her ability but I think her card certainly holds its own in our collection, and she really seemed to enjoy the project. She calls Fort Collins home and is sister to Marty and aunt to Carly. (Thanks, Katie, for doing such a great job recruiting your family!) 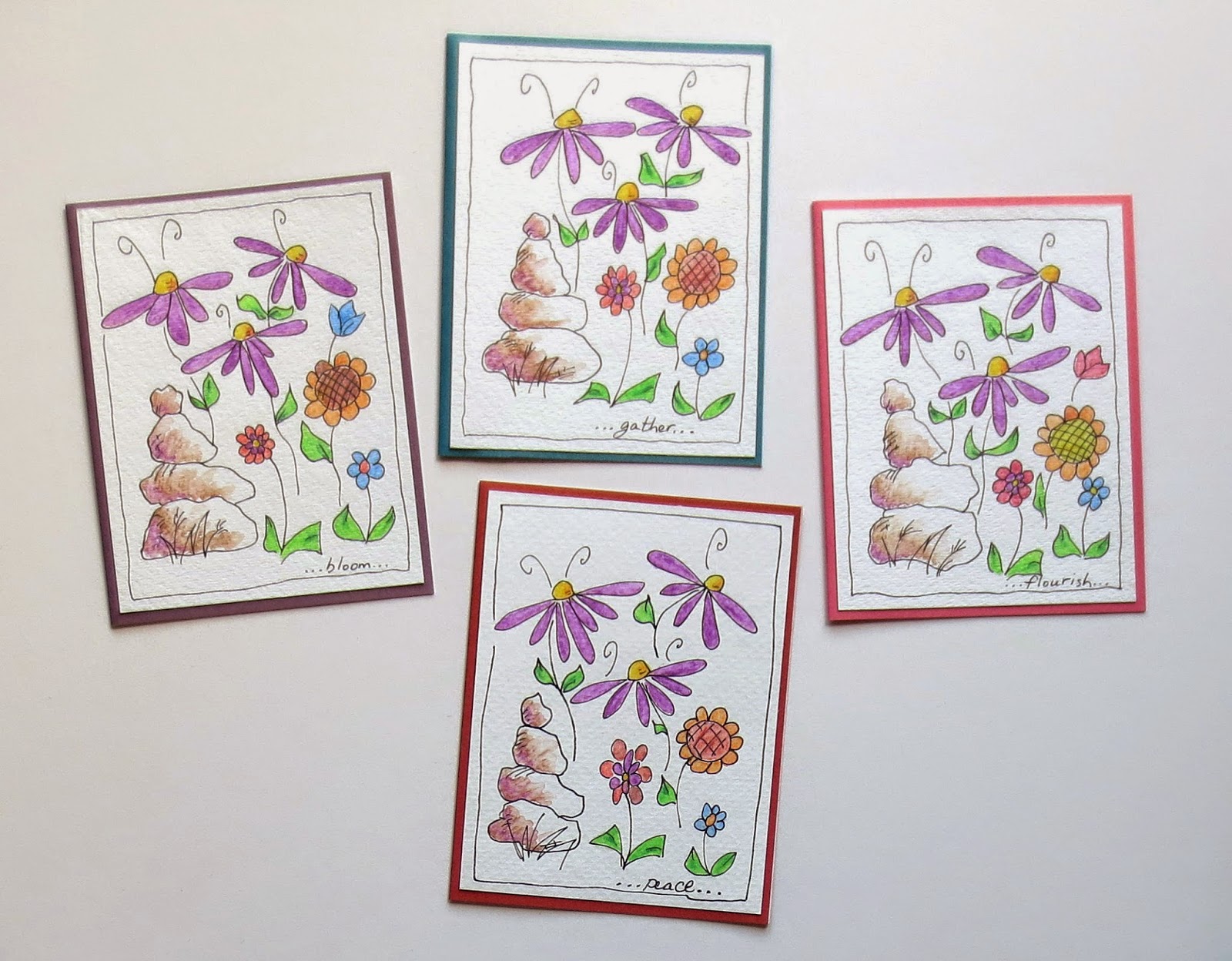 Mia is an artist who recently moved back to Fort Collins after teaching art in Oregon for a couple years. She was excited to be involved in a art activity soon after her return home. 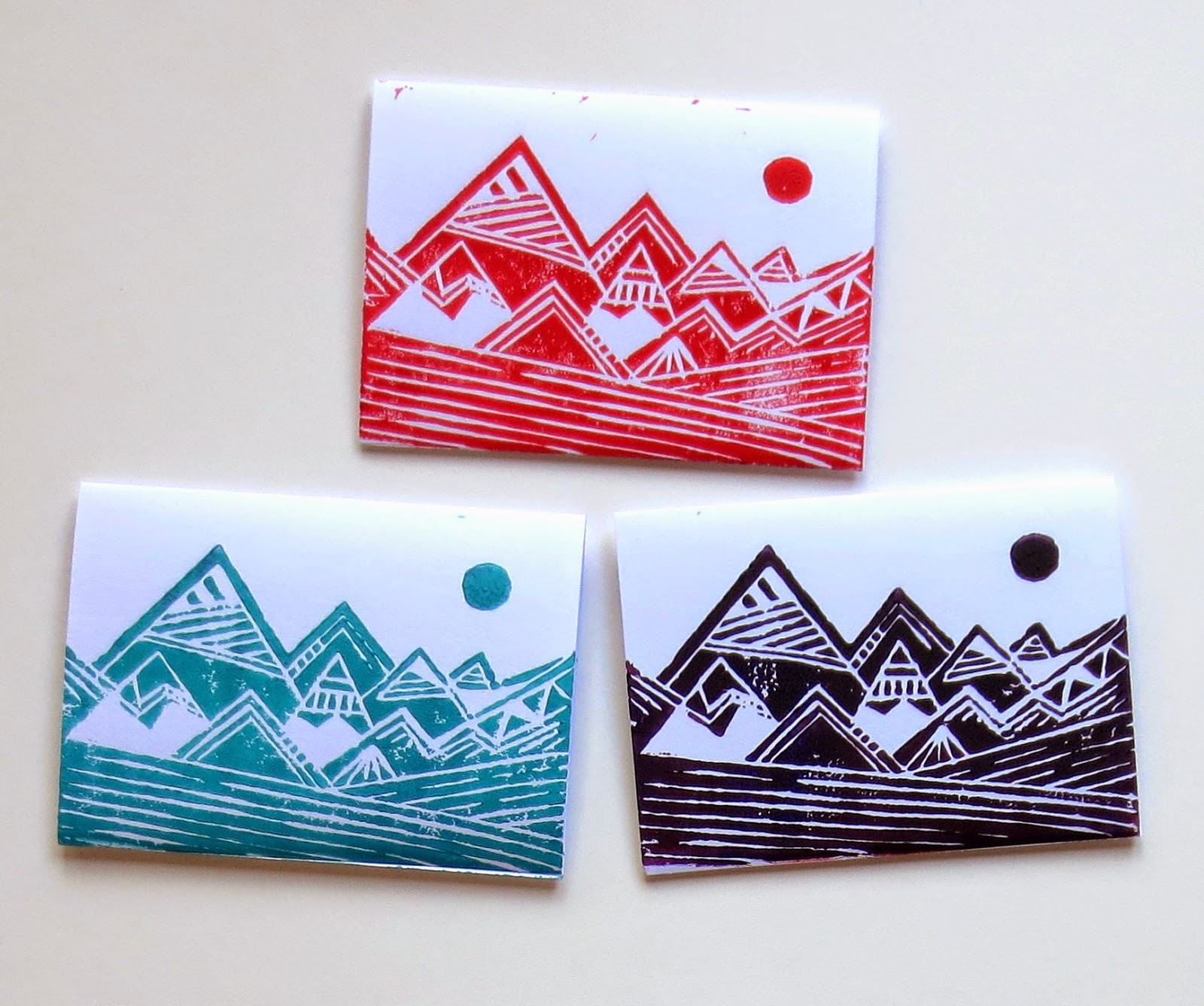 Both Mia and Sarah (whose cards are below) used Linocut to make their cards. Kind of like woodblock printing, Linocuts are carved from linoleum. From what I saw at the Card Swap work party in April, I was impressed at how quickly Sarah (from Fort Collins) went from just an idea, materials and tools to a solid card design and prints. She said "blue" took her to the ocean. 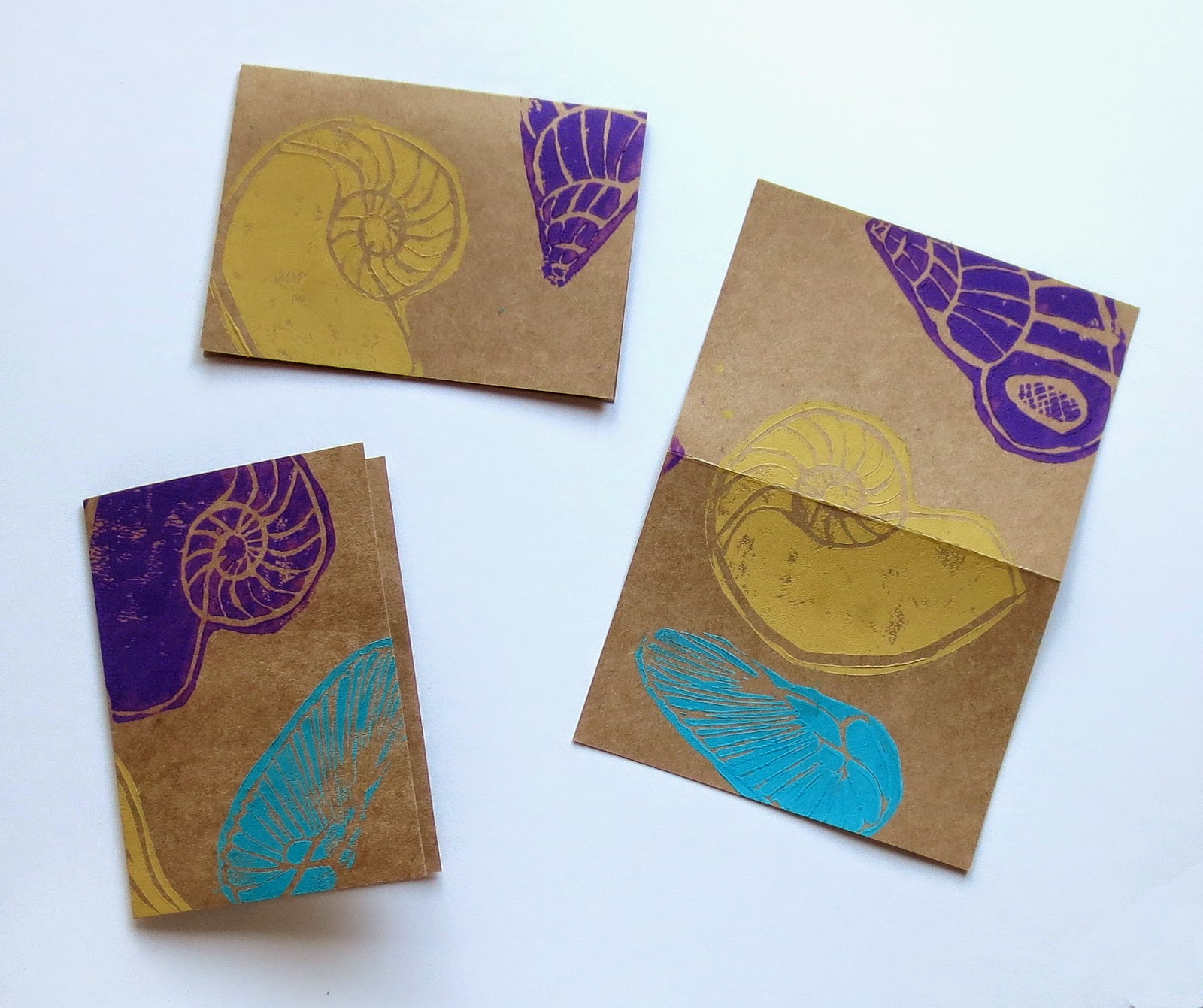 Mivvy (from the UK) went on vacation in Madeira and took these photos. Madeira is a mountainous Portuguese island off the coast of Morocco. These were the flowers she found in this tropical place. 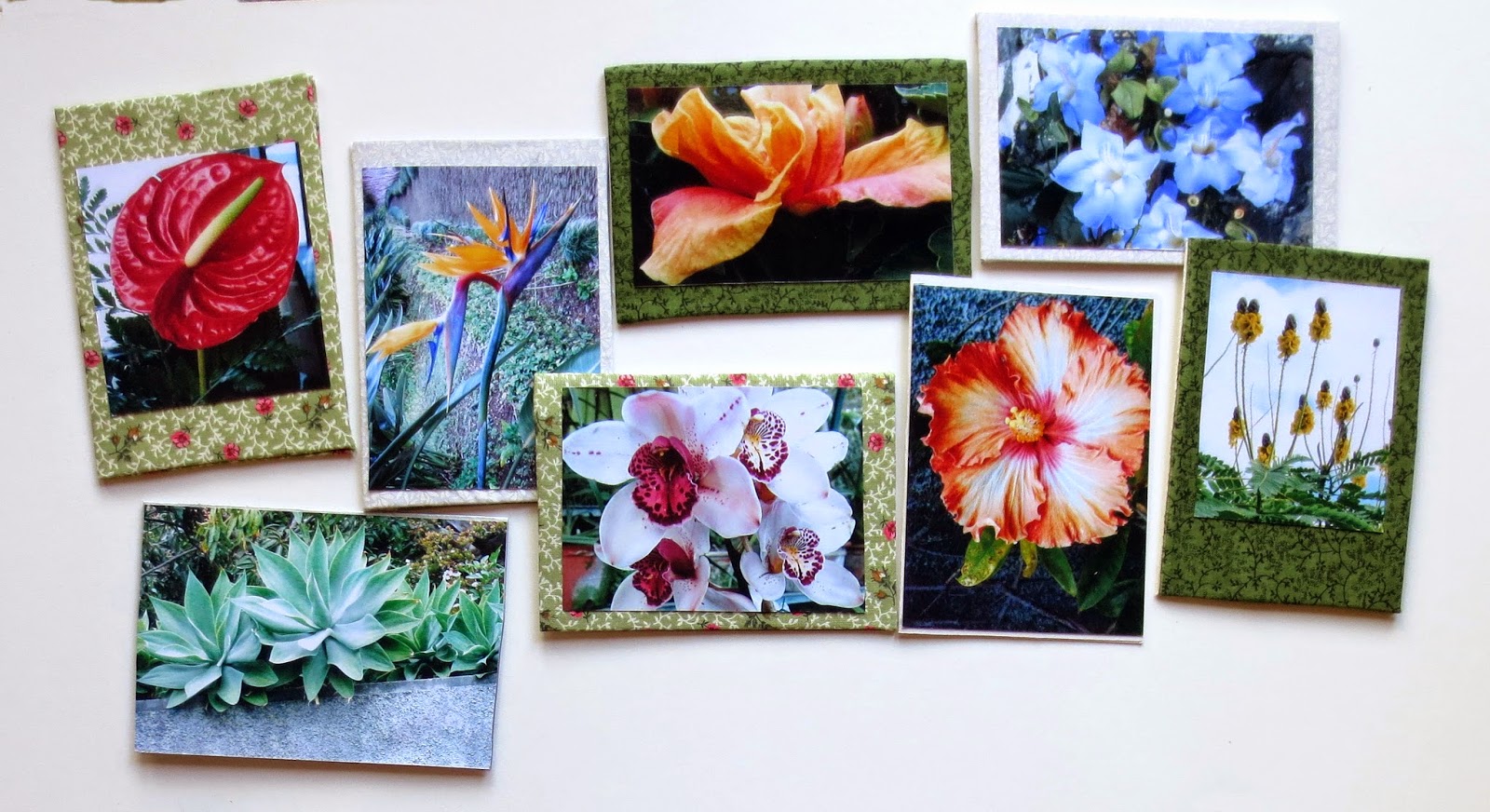 Nancy is from Portland, OR and experimented with weaving paper! Close inspection of her cards shows a high level of detailed work! 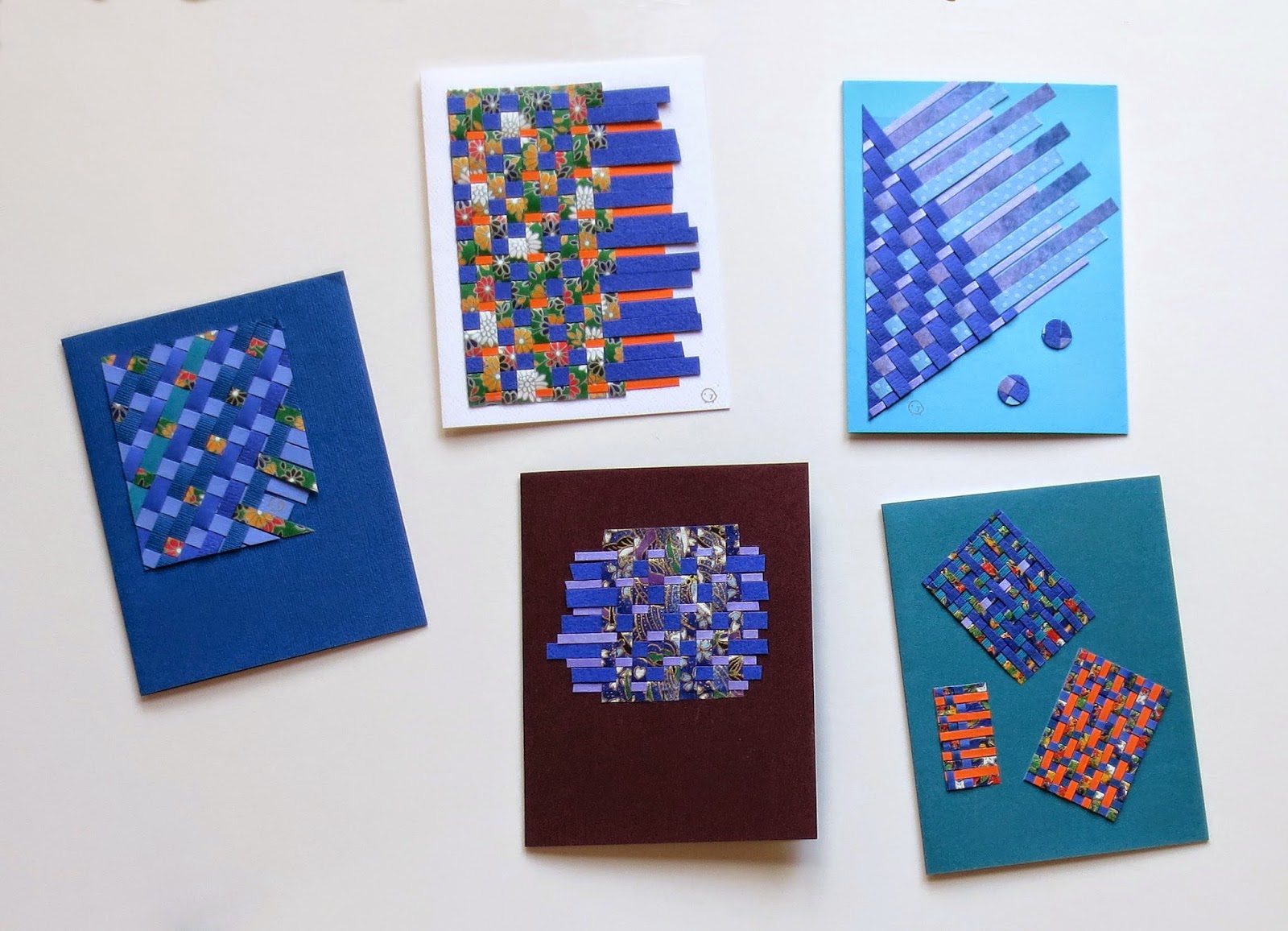 Phuong (currently in Boston) has a lot going on this year with an infant, but every time I ask her to participate in an art project, she rises to the challenge! I love it. This year, Phuong sewed fabric onto paper. So simple and yet the final product is pretty sophisticated! 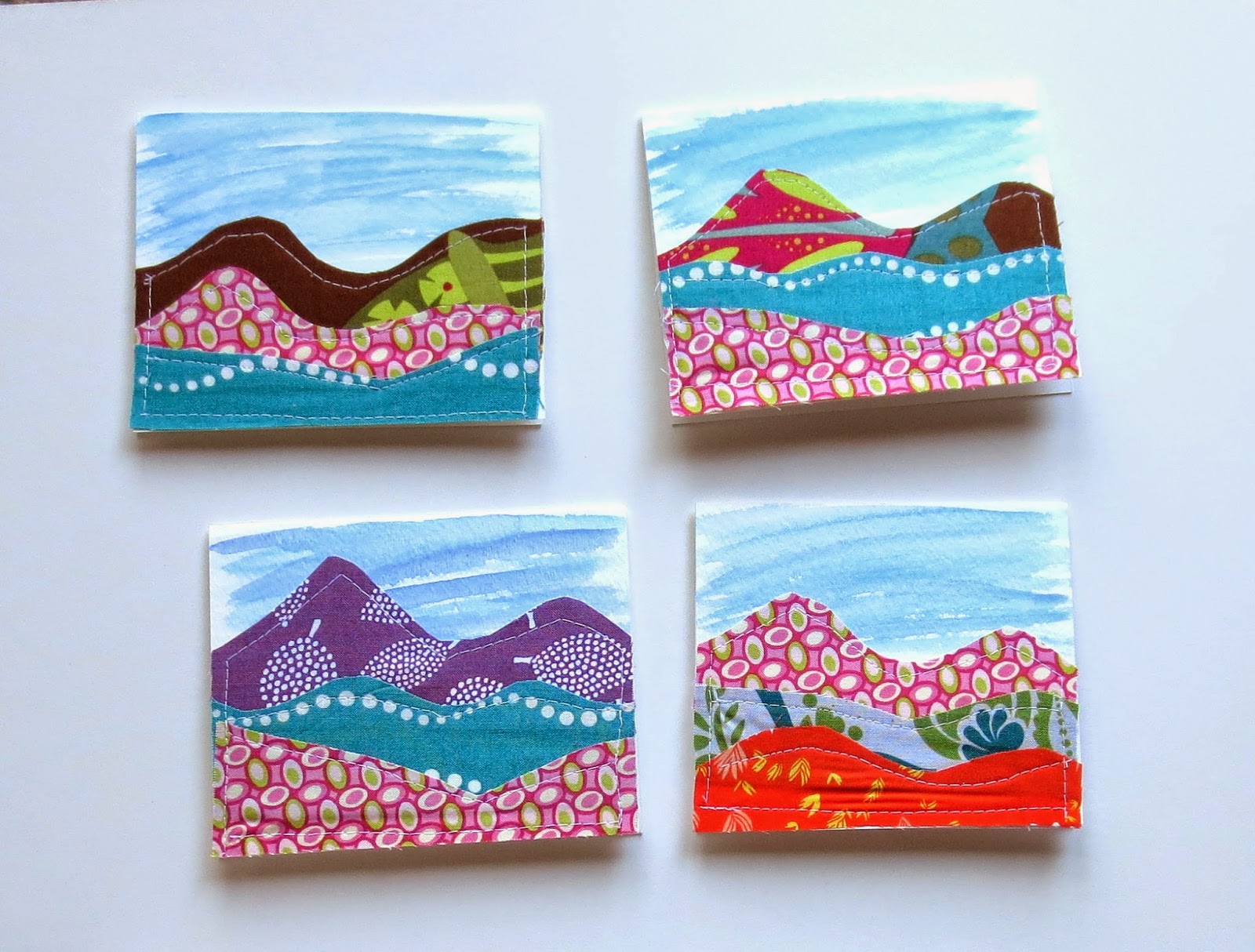 Shari is from Loveland, CO and had blue on her mind when selecting her papers. 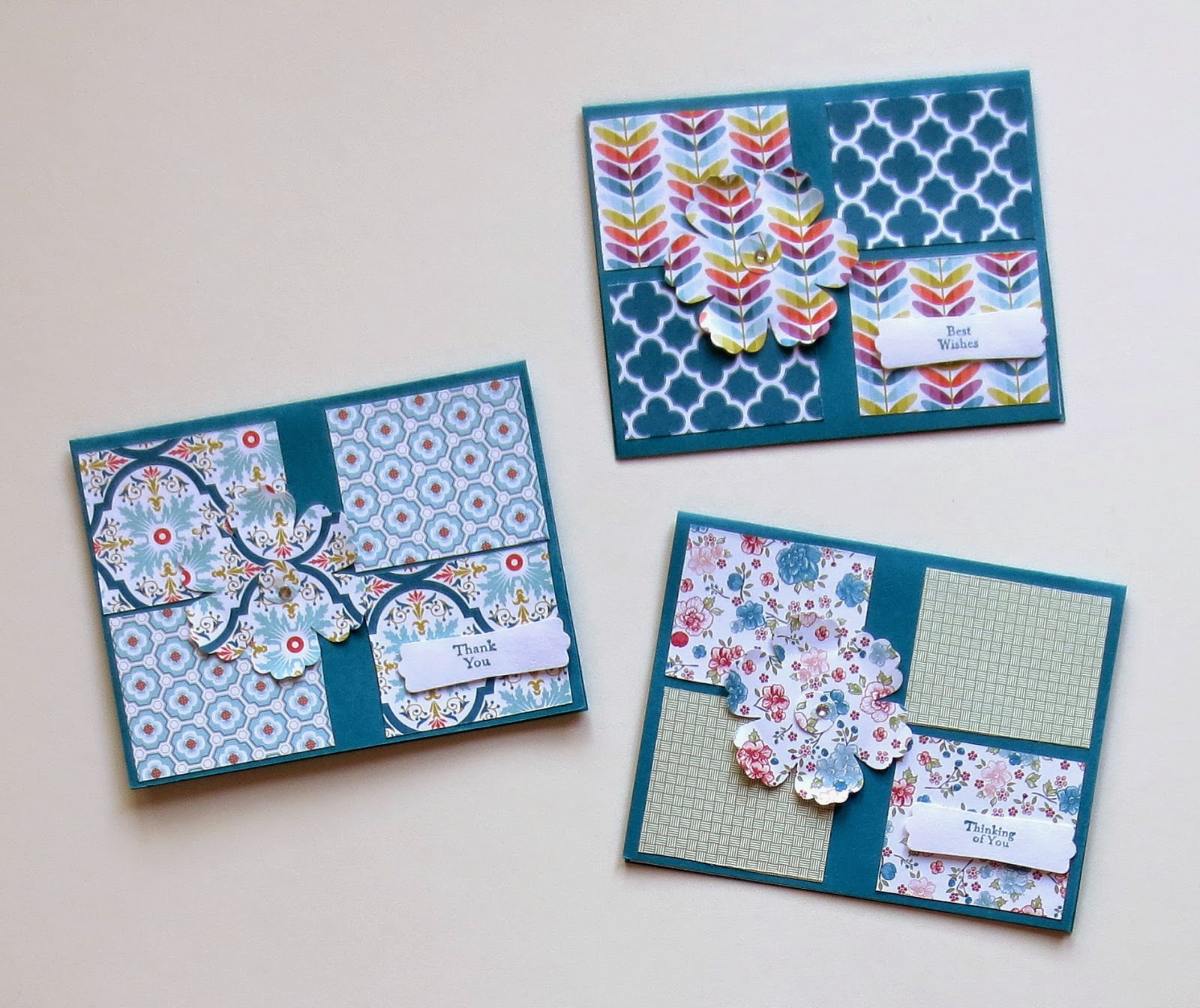 This is Sue T's 3rd year in the swap. She is from Wisconsin and Arizona and does Iris-folding. I love the swirly effect that folding two or three different colors makes.

Susan is from Fort Collins and is an encaustic artist. She was inspired by the corrugated paper and wanted to try out the wax painting on that unique surface. She even painted a base of encaustic gesso on them first, to make the colors pop. I'd never heard of such a thing! 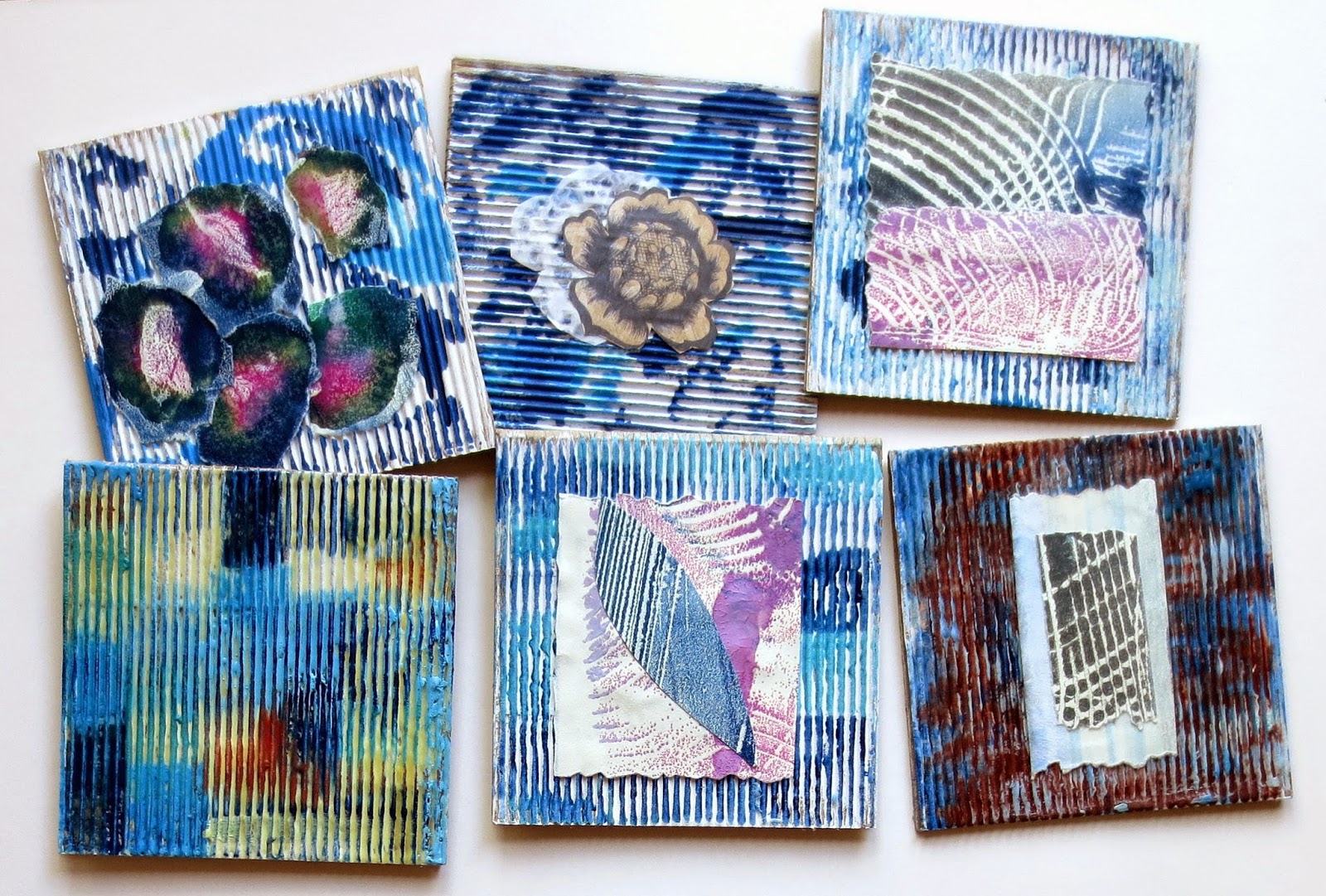 Last but never least, Cecilio, from Denver, kept his tradition of clean and thoughtful cards.  I love that the little hole of the flower on the front shows itself on the inside of the card. 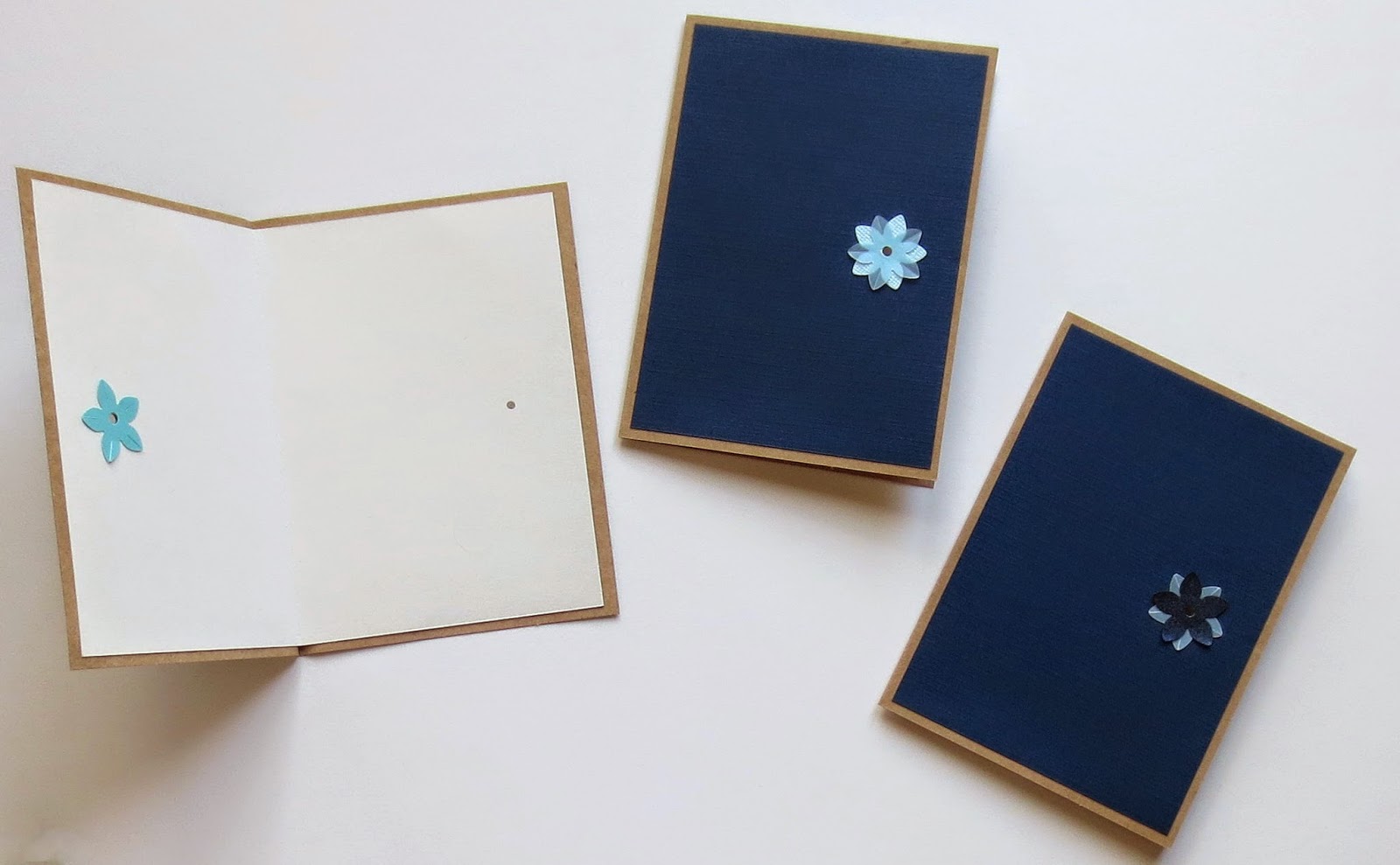 Remember that you can click on the photos to get better looks! Thank you to all who participated to make this swap the best yet! If you are a blog reader who would like to participate in the future, just contact me and I'll put your name on my list of invites for next year.