Click here to see the flyer for my Ribbons class in March!
Here are photos of 3 small purses I made out of ribbon recently.  I love the little brown one for its size: perfect for an ID and your iPod. I'm thinking of combining that with the bike bands (see next post down) to make an iPod holder for when you are working out. Wouldn't that be so much nicer than the boring ones they sell at the Apple store? 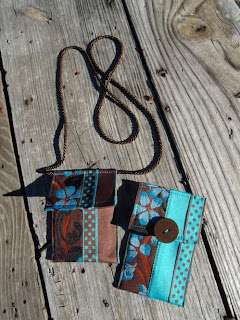 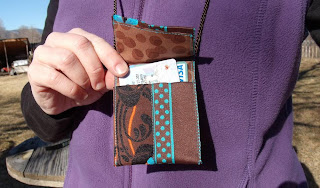 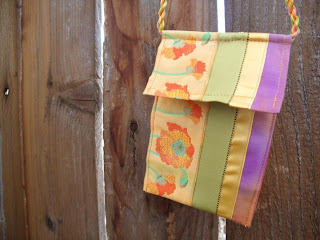 I've recently had to pay some visits to a chiropractor (unfortunately), but something more than just relieved back pain has come of it: a new art relationship!  Barbara McCulloch is a local painter, and four of her acrylic paintings hang in the waiting room of the chiropractor's office!  These paintings are so beautiful and lovely, with one or two white aspen tree trunks in the foreground and bright sky-like backgrounds, with colors like purple and orange. They really spoke to me.  Her contact info was noted, so I emailed her, which led to our first encounter this afternoon.  We talked for an hour or so about the business of art (she's got some excellent life experience) and then delved into making art!  Below is what resulted from her lesson to me: 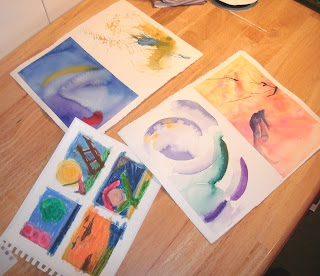 As you know if you've been reading this blog for awhile, I value professional development and I have always felt a desire to get back to basic foundations.  Well, today we started very much at square one (right where I needed to be) with oil pastels and watercolors, two mediums I've never loved.  Barbara said that she could see my artistic skills lie in design and precision, so she challenged me in this oil pastel exercise to be inspired by certain phrases and create each piece in just two minutes.  We did four pieces, and it loosened me up a little, forced me to use my intuition and emotion rather than my brain.  I found it to be pretty fun, actually!  The final product looks very elementary to me, but I really appreciated the exercise.  At first, 2 minutes fled by and I felt like I'd done almost nothing.  By the 4th one, my brain engaged a little more and the 2 minutes felt a lot longer.  I could think a little, and that led to the one I like the most (bottom right: "Dancing alone at home"). 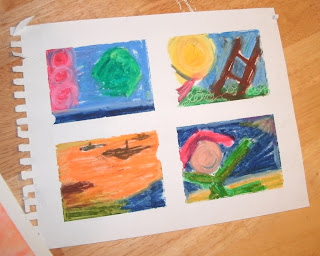 Meanwhile, I am thinking lots about teaching my own classes, and I finally have a date for a Ribbons Class(!) at Mama Said Sew: March 26.  Tell your friends!  To market the class, I just had to make samples of the projects we'll make (poor me) out of some of their ribbon.  Aren't these leg bands (for riding your bike) SO GREAT????? 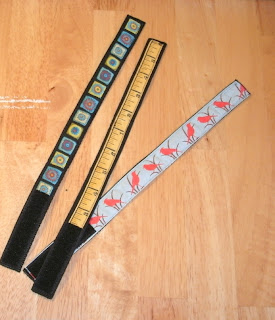 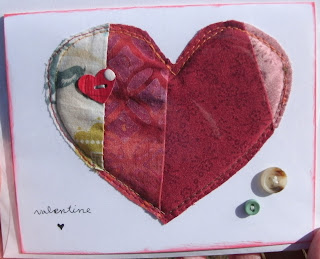 One of my fave holidays is next week: Valentine's Day!  Why do I love it so?
You can find 4 different designs of my beautiful handmade Valentines for sale in Fort Collins at The Eyes Have It in Old Town, just north of College and Mountain on the west side.  One of the designs is above.
Speaking of LOVING making cards, this year's annual 6 degrees of HLM International Card Swap is officially announced!  It consists of this:
If you'd like to participate, please send me an email (noted to the right), and I will send you the details.  Fu-un!
Posted by HLM at 12:26 PM 1 comment:

This week I wanted to sew some more scraps, so here's what I came up with, as a lightweight, flat, just-because gift for one of my quilt loving friends in Germany (I had some other, not-so-exciting stuff to send her and wanted to spruce up the package!).  I took the pictures of these coasters at night so the flash or available light doesn't represent the actual colors very well, but just know that in person they are delightfully bright! 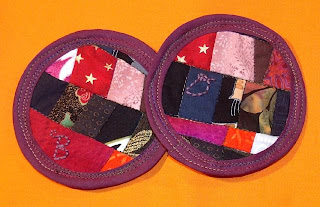 They each have a letter embroidered on them, a 'B' on one and a 'D' on the other.  I made the 'B' one first and noticed that the second one had a more polished look, after I'd initially designed and practiced on the first one.  You can see that I also used variegated thread around the edges. 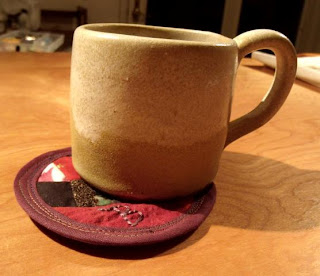 The final look, with a cup of cocoa!  (This awesome mug was made by my friend Micah.)
In the crafting world, I've noticed that crafted coasters have come to be called 'mug rugs.'  I think that is a little cheesy myself.
Posted by HLM at 9:03 AM 1 comment: