It's been another great year of card swapping, folks!  Let me show you the results.

First, I thought it would fun to make a visual of how we're all connected. Despite the swap's name, 6 Degrees of HLM International Card Swap, we only got to 4 degrees this year. But I love it!  I bet in another couple years, we'll somehow be able to fit Kevin Bacon in the diagram. 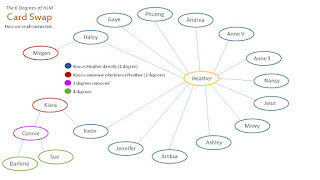 (Remember to click on any images for a closer up view.)

Ambra, who lives in Buffalo, NY, found some old pictures of work that she'd done previously. She photo-shopped this remedy bottle (originally painted on an old BINGO card several years ago) and printed it onto vellum. The words behind the vellum are from a book she never quite got into enough to finish, but out of context, the text inspires curiosity: 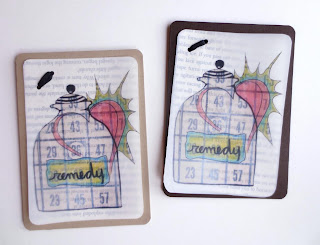 Andrea lives in Fort Collins, and she and I designed her card together, using all materials she already had! No trip to the craft store for her! The woven square was something she'd come up with already, and she was particularly hoping to use up some of that soft, earthy, fabric-like paper. (We may see it again in future years!) 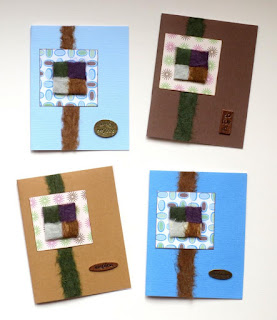 Anne S. is from Seattle, and she's lucky enough to travel to India fairly regularly. She is inspired by the geometric designs and details of Islamic architecture. (She studied architecture in college!) Her overall card design is simple and clean to keep the focus on the images. 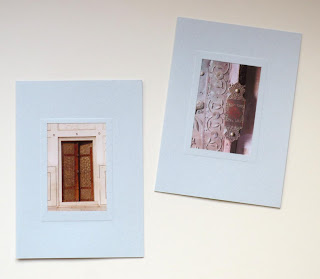 Anne V. is a busy mom and breadwinner for her family, and she came to the local work party with every intention to start and finish her cards. Snap! She was done in an hour! I was really impressed. She has a neat tool which looks like a make-up kit that allows her to color in her stamps in different ways. 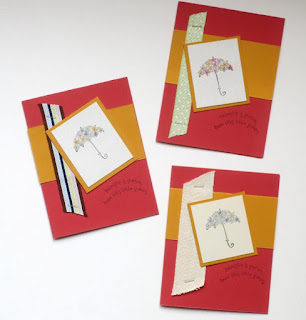 Ashley lives in Portland, OR, and spends lots of time in the St. John's neighborhood. Underneath the St. John's bridge is this idyllic scene. She took this photo with her iPhone and Instagrammed it. 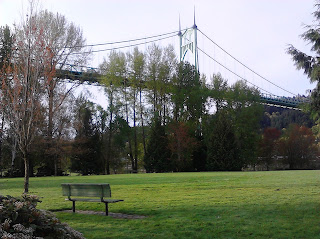 For her card, she uploaded the photo into a photo-editing program and spent lots of time tweaking it, making certain aspects more defined and changing the color mix. The end result is what ended up on her card. She also printed the photo out on metallic photo paper. The rounded corners of the photo are echoed in the writing space on the back. 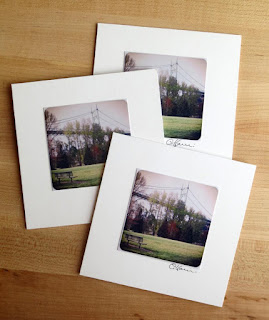 Connie lives half the year in Arizona and half the year in Minnesota. She has been experimenting very successfully with a new medium called alcohol ink.  She has even sold some of her work! 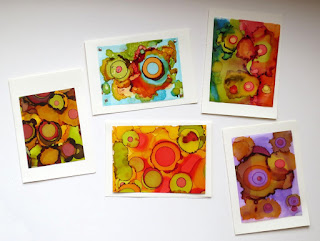 Darlene, from Wisconsin, submitted similar cards to what she made last year, but I found them to be much more refined. She even integrated some Iris folding into some of them (see Sue's cards, below). 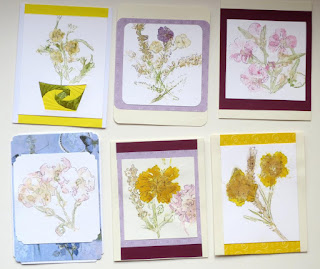 Gaye is from Fort Collins, and has been getting back into art. She says that this batik is one that she made awhile ago, as a test run for a bigger piece she made for a wall-hanging in her living room.  She is mostly pleased that she just actually made something!  She actually tried another one for this project, but it flopped. She says it was a good reminder to start early and remember that creating art is often a trial & error process. 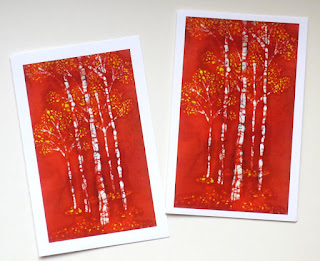 Funnily enough, Haley (also from Fort Collins) and Gaye work in the same place and Haley also had an idea that flopped!  These cards are what came of her second idea. 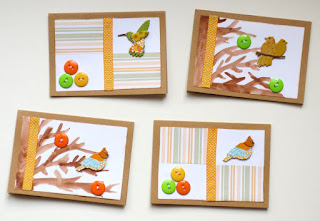 These are my two designs. I've been wanting to experiment with making cards out of the beautiful felt that one of our local shops sells.  I got the ideas for the cute puns online and made the images in felt my own. 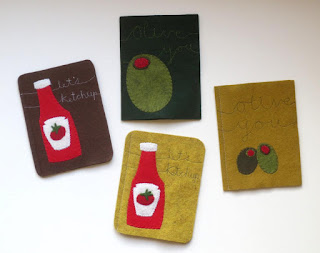 The card below, known as a Neverending Card, was a huge challenge. Please come back next week to see more about it, and learn where to find the template that I used!  I loved how it turned out, but it really was a mind-bender.  I had to make envelopes to make sure there would be a place to write your own message.  Watch the movie to see how the card works! 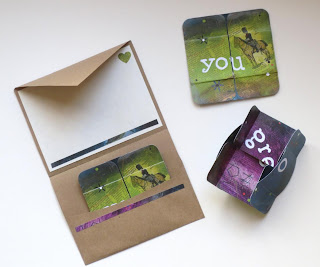 Jenn lives on Long Island in New York and got married last fall. Her wedding colors were a lovely combination of blue, burnt orange, metallic white, and dusty purple. This blue paper is what was leftover from her invitations. 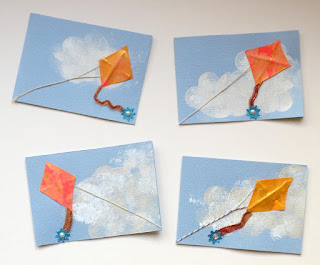 Jennifer, from Santa Rosa, CA, recently had the opportunity to travel to Peru and fulfill a long-standing dream.  She wrote that these cards were made from the gratitude she felt in her heart for everyone's support of her trip (she had to do some intense, short-term fundraising to make it all work out).  She says, "The light shining down the front--and stamped inside--has so many meanings and functions: healing, love, happiness, energy, spirit, growth." 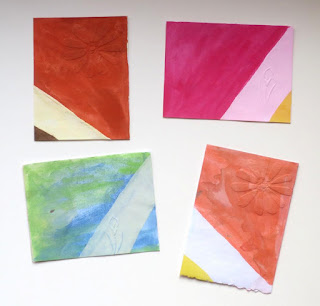 Katie, from Fort Collins, was in Portland, Oregon in March, and she was inspired by the colorful houses in the unique neighborhoods. Feeling that photographing doors was overdone, she focused on windows, then carried on the theme by making the card a window too. She says, "My final design got way simpler than my original thought. Originally, I wanted a window opening into another window and the whole card being one big window. What? Too much. I simplified it and then added in a fill-in-the-blank element inside a few of the windows for people to write (that was an afterthought, but it also had a theme of light and windows in the wording). 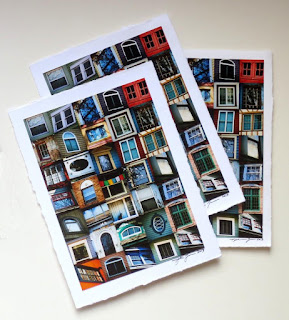 Kiara lives in Minneapolis, and has been learning to quilt with batiks this past year. She decided to use her quilt scraps for the cards.  She says Minnesota's winter has been a long one this year, so she decided to make "winter leaves," which she says are the liturgical colors of the winter months, but they're also a shout out to spring soon to come. When she wrote me with this description, she reported, "I am happy to say, as of this week, it finally IS spring in Minnesota!" 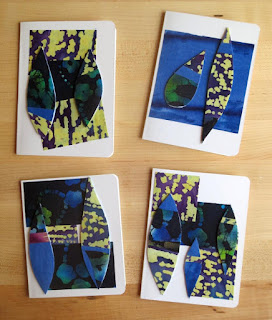 Megan is our one new person of the swap this year and she used watercolor pencils to create several different quilt designs.  She lives in Fort Collins. 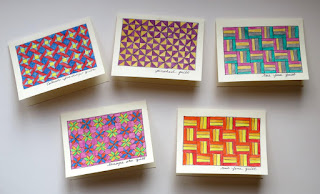 Mivvy, our international contingency, from Cumbria in the UK, made Christmas cards with small beaded bits attached!  I am excited to give her her cards in person in just a couple of weeks when we fly there to visit! 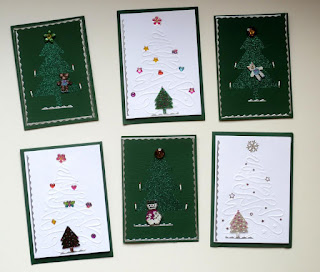 Nancy, from Portland, OR, says she was inspired this year after attending a papercrafting convention. She recommends looking at her card in all different kinds of light, and to tilt the cards. There's a lot more than initially meets the eye with that metallic paper! 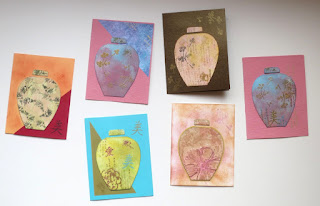 Phuong lives in Boston. She made lovely reuse of magazine cut-outs, combining them with beautiful printed papers and vellum. 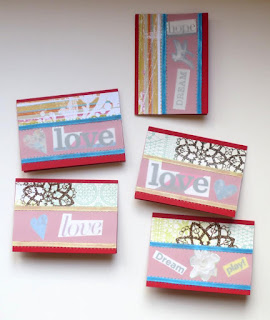 Last but not least, Sue's contribution was a whole new set of Iris fold cards. She submitted Iris fold cards last year too, but this year, it was all new designs. I think the cat and chicken were really artistic. 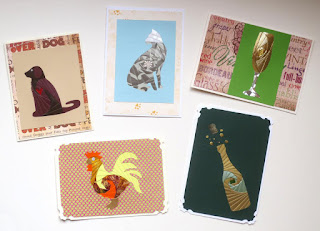 Finally, the big picture of all the cards laying out on my studio floor!  200 cards in total. I love seeing them all  together. 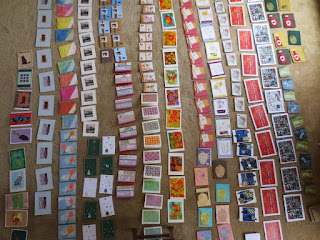 If you'd like to join in the swap, please just email me at the address to the right and I'll be sure to invite you to next year's, which will begin in February. Meanwhile, thank you again to all of this year's swappers. It was a great year.
Posted by HLM at 10:05 PM 1 comment: