At the beginning of December, I told you my goal was to blog at least 5 times this month.  Well then I saw that my blog posts from 2011 added up to 37, so in my head, I changed that goal to 8 times, and today marks my 38th post of 2012.  A record number of annual posts since starting this blog!

I wanted to share with you a sneak peek of what I'm hoping to work on a lot in 2013.  This is the beginning of a children's book idea I've had for a long while.  Finally just this week, I had the mental space and time to put the concept to the test.  The story will star these two characters, Martin (age 8) and his little sister Hannah (age 5 going on 6). The first image is my sketches of them, and the second image is of the same characters collaged (with finer details yet to be added): 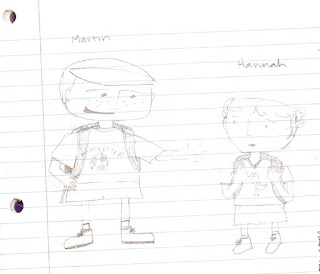 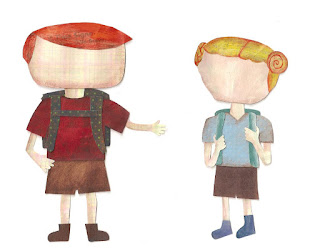 I was inspired by two things to move forward on this project: my friend in art, Franklin, said when I mentioned my idea to him, that kids would really like the collage component, since much of kids' first works of art are collage!  Also, another Fort Collins artist, Gale Whitman,  recently illustrated (and published!) a story by a local author, and I've seen her original paintings.  They are all hung up in her studio, each one a complete work of art in itself. She says it was a ton ton ton of work, but she just took it one illustration at a time.  And so, that is what I'm telling myself.  Just one page at a time, Heather!
(Looking at this comparison makes me think Martin's feet in the collage version need to be made a little bigger.)
Thanks for your support and enthusiasm in this year 2012!  I'm looking forward to another great year of art and community in 2013.
Love to you,
Heather
Posted by HLM at 8:41 PM

I love the way these characters look in color and I can't wait to see more!