The self portrait is a strange notion: who would want to buy a piece of art that depicts someone's portrait, particularly if the subject is not you or someone you love? Yet, self portraits abound in the art world.

In fact, self portraits are what selfies used to be. Our instructor recently stated, "Selfies have put artists out of a job!" Before the invention of the camera (and of course even afterwards too), artists slaved over artistic images of themselves for hours, manipulating paint or collage or marble or whatever medium, along with the use of a mirror, to encapsulate the essence of the self.  I tell you now: even with a camera as an extremely helpful modern-day tool, the self portrait continues to demand several hours and focused intentions.

Microexpressions are a phenomenon which were introduced to the world at large in the 2009-11 TV show Lie to Me. In this show, an expert could read the slightest change in facial expressions and interpret them in a way that led to to solving crimes. I found the show fascinating and indeed, agreed that there was something to the idea. I had no idea until I tried to draw myself. Microexpressions DO exist, people!

There is a fantastic Fort Collins artist, Haley Hasler, who uses self portrait almost exclusively in her work to explore truth and imagination, whimsy and earnest. I've puzzled over this channel of artistic expression for years--that is, until now. Now that I've made a self portrait, I finally understand the appeal. I almost feel as addicted to the idea of making more self portraits as I was to that TV show! 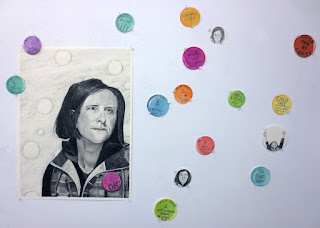 What a very complex topic 'identity' is! Our self portrait assignment was to incorporate identity in some way. As I sat with myself for so many hours, my most prominent identity of the day--being a non-parent--is what kept coming to mind. What face could I possibly depict that would show all the feelings that accompany the way I engage with the world around my experience of this identity? 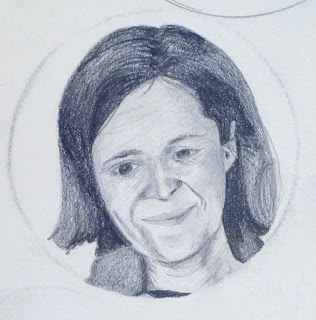 I tried several faces. I think I took about a hundred selfies. Once I picked ones that I think showed what I was feeling, the drawings of those selfies manifested in ways that were and were not always so successful. 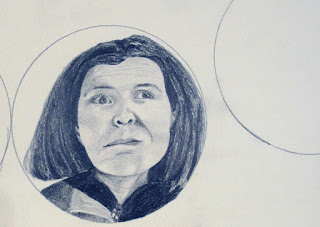 To claim any one identity is to deeply explore the various facets of that identity. I am lucky and grateful that I live in a time and place where I have the choice at all as to whether to have children. The choice was a challenging one to make and the process took me several years. Once I made the choice, the reaction of my community (friends, family, neighbors, co-workers, and strangers) added an entire, often unexpected layer to the experience. These reactions caused me to feel all sorts of feelings, from relief, smugness, validation, and a desire to advocate for others to make this choice for themselves to frustration and exasperation that my lived experience of womanhood might not be considered valid or as rewarding or meaningful or even purposeful.

To delve into this experience, this claim of being child-free, and to share my experience with you, took some courage. The last thing I want is to alienate anyone. Instead, I want to talk about things. I want to engage in dialogue about your experience and mine. Both matter; one is not better or worse than the other. But this is my truth, and I am emboldened by having taken this step to put it out there in the world.
Posted by HLM at 11:52 PM